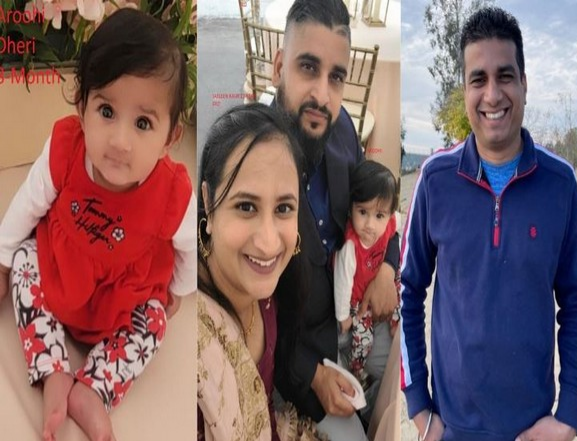 California: The abducted Punjabi-origin family of four including a 8-month-old child, was found dead on Wednesday here, authorities said.

Merced County Sheriff Vern Warnke termed it a horribly, horribly senseless incident and said that bodies of the victims were found in the same area today.

The family were abducted from from the South Merced Area of Merced County in the US on Monday.

Police had detained a suspect in the case on Tuesday, who was critical injured and was undergoing treatment.

Jasdeep’s parents Randhir Singh and Kirpal Kaur are residents of Harsi village in Tanda block of Hoshiarpur. Charanjit Singh, a neighbour of Randhir Singh, said the family was in a state of shock.

Randhir Singh is retired from the health department and Kirpal Kaur from the education department.

According to details, Randhir Singh had returned from the US on September 29. After receiving about the kidnapping news, he returned to US on Tuesday.

Punjab Chief Minister Bhagwant Mann expressed deep condolences over the incident and wrote in a tweet, “An eight-month-old girl was also murdered in California after four Indians were abducted and murdered. My heart is deeply saddened by this news and I share my grief with the bereaved families. At the same time, I appeal to Union External Affairs Minister @DrSJaishankar to conduct a high-level inquiry into the matter.”