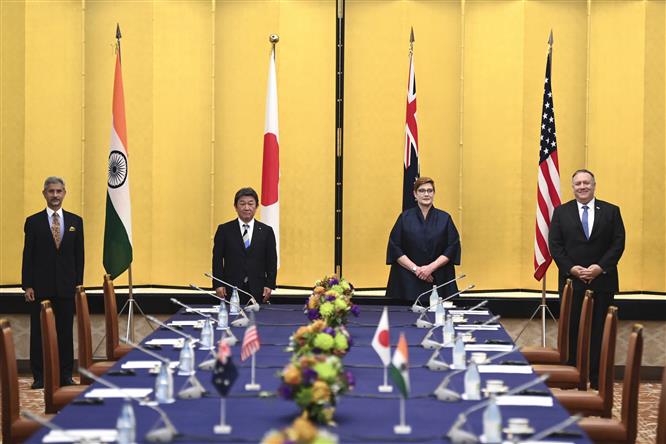 India on Tuesday said advancing security and economic interests of all countries having legitimate and vital interests in the Indo-Pacific remained a key priority.

In an address at a ministerial meeting of the “Quad’ grouping in Tokyo, External Affairs Minister S Jaishankar also talked about its common position of ensuring a “free, open and inclusive” Indo-Pacific.

The meeting of foreign ministers of the ‘Quad’ or Quadrilateral coalition comprising India, the US, Japan and Australia is taking place in the backdrop of growing concerns over China’s military muscle flexing in the Indo-Pacific.

Besides Jaishankar, the meeting is being attended by US Secretary of State Mike Pompeo, Australian Foreign Minister Marise Payne and Japan’s Toshimitsu Motegi.

“As vibrant and pluralistic democracies with shared values, our nations have collectively affirmed the importance of maintaining a free, open and inclusive Indo-Pacific,” Jaishankar said.

“We remain committed to upholding the rules-based international order, underpinned by the rule of law, transparency, freedom of navigation in the international seas, respect for territorial integrity and sovereignty and peaceful resolution of disputes,” he said.

The second ministerial meeting of the Quadrilateral coalition on Tuesday is expected to collectively affirm the importance of a free, open and inclusive Indo-Pacific in the backdrop of growing Chinese assertiveness in the region.

Last week, the Ministry of External Affairs said the meeting of the foreign ministers of the four countries is expected to collectively affirm the importance of a free, open and inclusive Indo-Pacific.