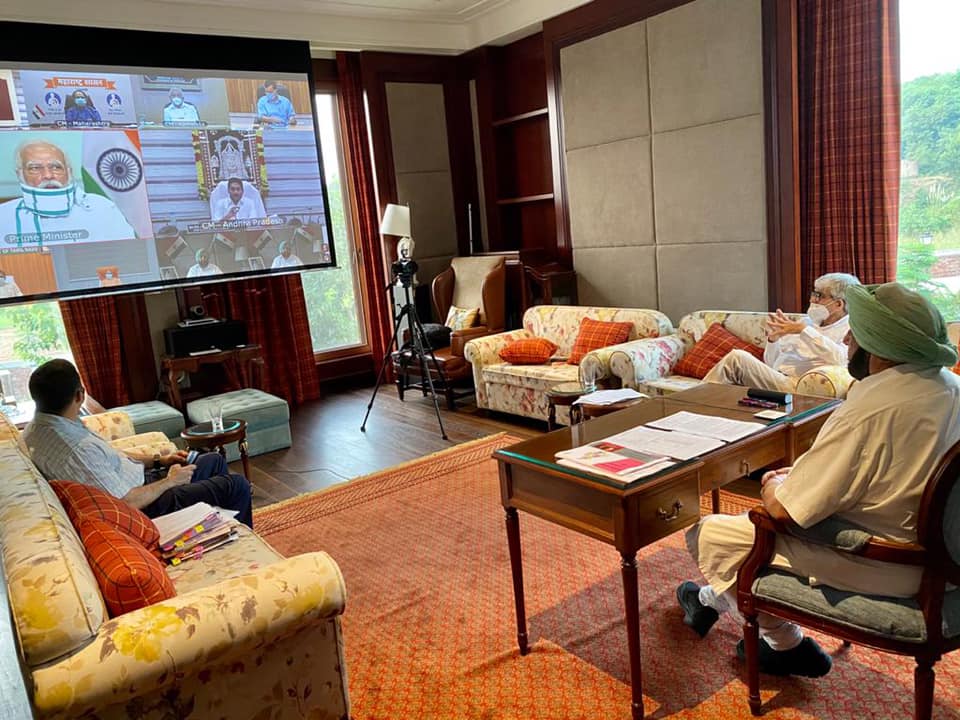 Chandigarh, September 23: Amid apprehensions of shortages with rising cases, Punjab Chief Minister Captain Amarinder Singh on Wednesday urged the Prime Minister to direct urgent steps to ensure adequate supplies from other states, and also sought expeditious release of Rs 200 crore that the state government had requested as the next tranche of central aid for Covid management.

With experts suggesting of possible aggravation of Covid conditions due to stubble burning, the Chief Minister also reiterated his demand for fiscal aid by the Centre to farmers for defraying the cost on management of paddy straw. Though the state government is launching an aggressive media campaign to educate farmers and people in general, giving the linkage with Covid, it was imperative for the Government of India to step in with the Rs 100/quintal compensation the state has been seeking for the farmers to manage the paddy straw.

During a virtual meet with Prime Minister Narendra Modi, the Chief Minister further urged him to direct the Chief Controllers of Explosives, Nagpur, to clear the license request for establishment of a liquid medical oxygen plant at Government Medical College, Patiala, by HLL India Limited, under the PM Swasthya Surkhsha Yojna (PMSSYSY).

The Prime Minister, while promising to look into the Chief Minister’s requests, suggested that the state government should strengthen its Covid awareness efforts by involving the civil society even more aggressively and making announcements from Gurdwaras and other religious places. He expressed the confidence that Punjab would be able to reduce the positivity rate to less than 5% and bring down the Covid Fatality Rate (CFR).

Noting that government and private hospitals in Punjab could end up facing shortage of medical Oxygen supply due to the late surge of Covid cases, Captain Amarinder informed the Prime Minister that with no manufacturers of medical oxygen, the state was dependent largely on three big manufacturers for liquid oxygen. These are at Baddi (H.P.), Dehradun (Uttarakhand) and Panipat (Haryana), but the Dehradun and Panipat plants are not supplying oxygen as per the state’s demand, he said, adding that the Panipat plant can supply more oxygen if supply to Panipat Refinery is curtailed. His government, on its part, was in talks with industry to convert industrial oxygen to medical oxygen.

On the fiscal package, the Chief Minister said the Government of India has released Rs.131.22 crore from the COVID-19 Emergency Response Fund, and after submitting a Utilization Certificate (UC) for the whole amount, the state had requested GoI for immediate release of Rs.200.00 crore, which is awaited. He further pointed out that the Government of India was requested to reconsider the limit of 35% expenditure for Covid relief under SDRF from the overall availability of the resource envelope, but the Centre is still continuing with 35% limit on SDRF for Covid on yearly basis. He requested the Prime Minister to make this limit as overall limit or removed altogether as the pandemic is going to stay for a long time.

To further strengthen the state’s fight against Covid, the Chief Minister also requested that installation of ventilators provided by GoI be completed by BEL at the earliest, while also pointing to complaints of their malfunctioning by both public and private healthcare institutions. He urged the Centre to direct PGIMER, Chandigarh, to add more ICU beds, and also to strengthen their Satellite Centre at Sangrur and initiate work in Ferozepur, as requested even earlier. AIIMS, Bathinda may be asked to increase beds for Covid, currently 20, he further said.

The Chief Minister further sought integration of ICMR portal with State COVA App for allowing the data to be pulled in respect of each lab situated in Punjab, as already requested to DG, ICMR.

Updating the Prime Minister on the state’s Covid situation, Captain Amarinder said the last 3-4 weeks had seen surge in cases, and, on an average in the past week, around 2400-2500 cases and around 55-60 mortalities were reported daily. The main concern, he said, was the Case Fatality Ratio (CFR), which remains high at 2.9% despite some reduction in the past one week. He listed several measures being undertaken to check CFR, especially in the nine worst affected districts of the state. The major problem, he said, was the casual (chalda hai) attitude of Punjabis, who do not take minor symptoms seriously. The problem had been compounded by the ongoing protests, where even certain parties, like Lok Bhalai, had been spreading propaganda against the need to wear masks, he said, adding that 25% people, especially in congested areas, were not wearing masks and the police had been fining 4000-5000 violators every day.

The Chief Minister also referred to the recent disinformation campaign by mischief mongers, some of whom had political links also and had been carrying out a very organized campaign, terming Covid as a conspiracy by Government of India and Government of Punjab and spreading false information on harvesting of organs. This became very active on social media, and some panchayats passed resolutions against testing, videos went viral and a general perception of fear was created among people against Covid testing, he said.

The situation had now improved, and the state is currently doing around 30,000 tests daily on both RT-PCR and RAT, and aims to take it to 40,000 soon, said the Chief Minister, also sharing details of the Covid kits being distributed to patients in isolation to help overcome stigma attached to hospitalization.