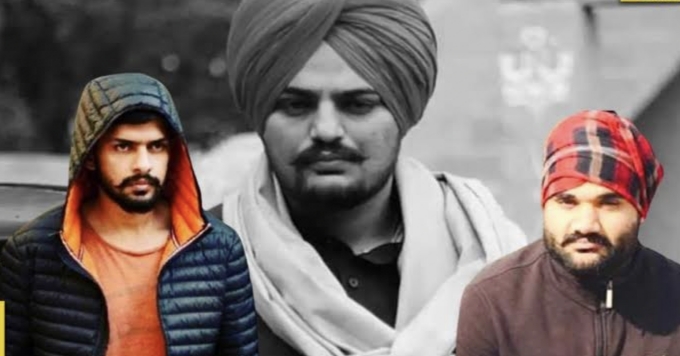 Chandigarh: In the Sidhu Moosewala murder case, the Bambiha gang in Facebook post has challenged Goldy Brar not to hide in abroad and talk but face them in the Punjab.

“If you have guts, come to Punjab and show it. Will avenge Moosewala’s murder. There was no link to Moosewala, but the conspiracy hatched by Goldy Brar by killing the innocent Moosewala and claiming him to be of the Bambiha gang will have to be paid,” the Gang said.

The Bambiha gang is publicly challenging Goldy Brar to come to Punjab. Recently, the Punjab Police arrested Lawrence gang gangsters Deepak Mundi, Kapil Pandit and Rajendra Joker from the Nepal border. After the arrest of these three gangsters, many revelations are also happening. NIA raids are also being conducted on the houses of gangsters in 3 other states including Punjab.

Already, the investigating agencies of the Center have given inputs to the Punjab Police that there is every possibility of a big gang war in Punjab. Punjab Police is also alert after this input. Now in this way, the threats of both groups to each other can spoil the atmosphere of Punjab.

In Punjab, the Bambiha gang and Lawrence gang can clash with each other anytime.

Once tried in Nalagarh

Goldy Brar’s brother was murdered by Chaska Jaito and Maan Jaito in 2020. The Bambiha gang wrote that we have not done any illegitimate work till date. We have old enmity and issues. Whatever we do, we do it to avenge our brothers. We hate only those who are our enemies, we have no enmity with anyone else. Like Goldy Brar killed Sidhu Moosewala by linking him to our group without anything, absolutely illegitimate.

Then he resorted to the names of the community, creed and saints to justify Sidhu’s death. Want to tell Goldy to come to Punjab if he wants to avenge his brother’s death from us. If he is really a man, then do not kill innocent people in the name of revenge for his brother’s death. We will meet in Punjab. The match will be face-to-face, then will tell Goldy how to take revenge.

You talk about Jarnail Singh Bhindranwala, Bhindranwal never did any wrong. Sitting in Punjab, he has always talked about the rights of Punjab, not sitting abroad like you. Bhindranwale never killed illegitimate people, just as you are killing illegitimate people in the name of your brothers. You talk about sects, saints and communities, damn you. Death is not death, death of a person’s conscience is death. These words also belong to saints. Your conscience is dead. Killed Sidhu, now you have come to threaten his family.

Remember one thing, everyone’s families are in Punjab. Of course you’re sitting outside, but remember 100 times. if something goes wrong with the family of any of our partners, the consequences will be exactly the same for you, the Bambiha gang wrote in the post.

Sidhu Moosewala’s link has been forcibly added to us, so now it is necessary to avenge it. Whoever has any enmity with us, his second home is death.

One thing Delhi and Punjab police want to say is that we have nothing to do with Rinda. Whatever we do, we do for our enmity, we do not do any illegitimate work.

As long as Rinda was a gangster, of course, he will have a link with one of our gang members, but since he has come in contact with anti-national forces, we have nothing to do with him, nor have any contact with him, the Gang claimed in a social media post.