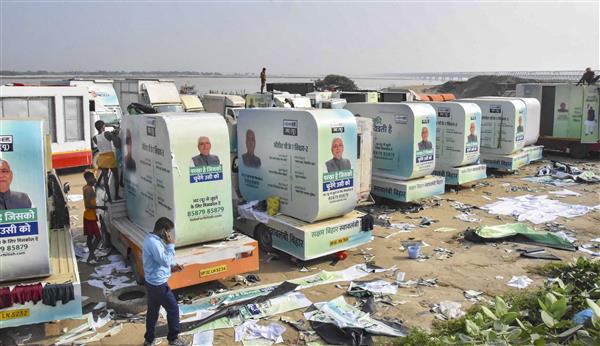 After days of suspense, the NDA on Tuesday declared its seat-sharing formula for the upcoming Bihar elections among partners-JD-U, BJP, HAM(S) and new entrant VIP.

Making the announcement in Patna, Chief Minister Nitish Kumar said JD-U will contest 122 seats and BJP 121 seats in 243-member Bihar Assembly. While JD-U will leave seven seats from its quota for Jitan Ram Manjhi-led HAM (S) the BJP will allot some (expectedly nine) to Mukesh Sahani-led Vikassheel Insaan Party which dramatically walked out of the RJD-led ‘Mahagathbandhan’ a couple of days back.

Nitish Kumar said there is no confusion among NDA partners over seat allocation and that it has also been decided who will contest from where.

Regarding Chirag Paswan led-Lok Janshakti Party, which parted ways with NDA in Bihar berating JD-U and backing BJP and Prime Minister Narendra Modi, Nitish Kumar said, “I do not give importance to who says what…people have got freedom to speak.”

“Ram Vilas Paswan (Chirag’s father and union minister) is unwell, we want him to recover. He is in hospital but may I ask could he go to the Rajya Sabha without support of JD-U,” he questioned.

Meanwhile, putting to rest all speculations BJP said its alliance with JD-U is “unbreakable”. In an apparent message to Chirag, Deputy CM Sushil Modi added that state chief Sanjay Jaiswal has made it clear that “those who will not accept Nitish Kumar’s leadership will not be a part of NDA in Bihar”.

“Nitish Kumar is the face of NDA in Bihar poll and he will be the CM face as well. Whoever (BJP and JD-U) gets what number (of seats) Nitish Kumar will be the CM…there are no ifs and buts over it,” he added. Sushil Modi was also quoted as saying that Chirag may not have taken such a step if his father was well. Paswan, who recently had a heart surgery, is currently recuperating in the hospital.

Regarding the LJP using the photograph of the Prime Minister on its election posters, leaders said if need be they will write to the Election Commission that no other party, except BJP, JD-U, HAM(S) and VIP, should be allowed to use his pictures during campaign.

In Delhi, BJP General Secretary Dushyant Gautam said PM Modi is a national leader and anyone can use his photograph. “If Congress also wants to use his photograph why should we have any objection,” he said, making light of LJP’s move.