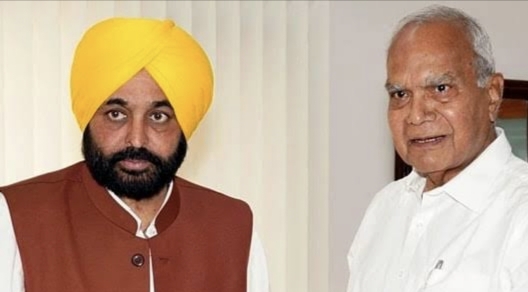 Chandigarh: A new political controversy erupted in the state after Punjab Governor BL Purohit questioned the absence of Chief Minister Bhagwant Mann from air show was held on Air Force Day on Saturday at Sukhna Lake in Chandigarh.

The President Draupadi Murmu was chief guest in the event. However, Punjab CM Mann was remained absent to attend a political rally in the Gujarat along with Aam Aadmi Party supremo Arvind Kejriwal.

The governor was furious over this and addressing an event, he questioned why Bhagwant Mann did not attend the event when it was a constitutional responsibility for him to come from the presence of the President. He said that he even personally extended an invitation to Mann but he gave a miss.

Earlier, Mann and the Governor had come face to face on the issue of assembly session.

Reacting sharply to governor’s comments over absent of Chief minister Bhagwant Mann today, Punjab Cabinet minister Aman Arora said that it is very unfortunate on the part of Governor for raising this ‘political’ issue from the stage of Governor house.

Arora said that CM Mann’s event was scheduled and he had deputed him to receive and welcome President Draupadi Murmu during her visit in the Chandigarh.

He said that he along with five other cabinet ministers and all senior bureaucrats attended the event to celebrate Air Force Day today. However, honorable governor made this unfortunate remarks against CM.

He urged Governor to restrain from making such statements in the future.

CM Bhagwant Mann is currently campaigning for the party in Gujarat. Assembly elections are going to be held there soon. In which the Aam Aadmi Party is also trying its luck. The Air Force event was earlier scheduled to be held in Delhi but was later shifted to Chandigarh.

All opposition parties have called them irresponsible.

Despite the presence of the President, all opposition parties targeted CM Bhagwant Mann for not reaching the program. Shiromani Akali Dal and Congress leaders said that CM Mann did not even take care of the protocol. Opposition leaders said that the CM being constitutionally negligent is a matter of concern for Punjab.

Aap said that earlier, Governor Banwarilal Purohit had cancelled the session of the Punjab Assembly convened by the AAP on September 22 only to prove the trust vote. CM Bhagwant Mann called the session again on September 27 citing issues related to Punjab. When the session started, the confidence motion was passed in the House leaving the issues. Since then, the bitterness between the two has remained.

The growing tussle between CM Mann and Punjab Governor Banwarilal Purohit was also evident in the remaining program of Chandigarh Airport. Both were sitting on a stage, but ignored each other.