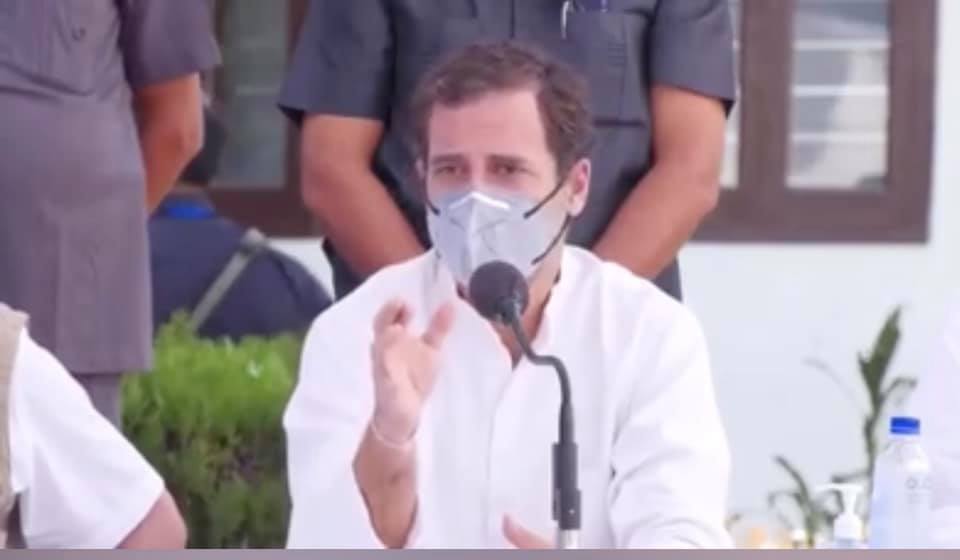 Patiala, October 6
Rejecting the suggestion that the Central Government was able to take unilateral decisions because of a weak Opposition, Congress leader Rahul Gandhi on Tuesday said “give me free press and other key institutions and this (Narendra Modi) government will not last long.”
Pointing out that the Opposition in any country functions within a framework, including the media, the judicial system and institutions that protect the voice of the people. “In India, that entire framework has been controlled and captured by the Bharatiya Janata Party (BJP) government, the entire architecture designed for giving voice to the people has been captured,” he added.
“Give me free Press and free institutions and this (Narendra Modi) Government won’t last long, declared Rahul
The Modi government has taken control of all the key institutions, and it has done so not democratically but forcibly, Rahul told a press conference here on the third and final day of his Kheti Bachao Yatra in Punjab against the black Farm Laws. The BJP government has captured the soul of the country, which is what the Congress is fighting, he said, adding that this fight will become more and more aggressive, going forward.
Terming the control of institutions by the government a big problem, Rahul noted that no other country in the world today is faced with a situation where even the Media does not question the government when its land has been seized by another nation. Modi, he said, is not interested in India’s people but is only concerned about protecting and promoting his image, which would have got dented had he admitted to China’s incursion. The media, by helping promote his image, is also to blame, said Rahul, adding that Modi was comfortable in the knowledge that the press would project his one-sided statements. “Why don’t you question him at press conferences,” he asked the media.
Rahul, however, said that while the government may have captured the institutions but the fact is they cannot control the farmers, the youth and the small traders, whose interests they are destroying. “I work among these people, who are the hardest hit by Modi’s policies. I am a patient person, and will wait till the people of India see the truth,” he added.
Rahul was flanked by Punjab Chief Minister Captain Amarinder Singh, who informed the media that his government will soon bring a special session to scuttle these legislations of the Centre, which were crafted to destroy not just the farmers but the entire agricultural system, and the state.
Rahul, on his part, said he was committed to fighting against the Modi government’s attack on farmers, just as they had earlier targeted SMEs and small traders with demonetisation and GST. “I will fight them and stop them,” he declared, pointing out that if MSP goes, Punjab, Haryana, and other agricultural states like UP and Rajasthan will have no future left.
In response to a question on Modi &amp; Co. making fun of his protests in Punjab and Haryana, Rahul shrugged it off, pointing out they had done that in February too, when he had first warned about Corona. But the truth is there for all to see now, he said, adding that six months on, everyone will know the truth of what he is saying now on the farm laws too. Taking a dig at Prime Minister Narendra Modi’s earlier statement that India will win the war against Covid in 22 days, the Congress MP said “you can see for yourself who talks more sense – Modi or me.”
“You (media) can decide who is joking,” said Rahul.
Noting that all systems are connected, and destruction of one leads to the ruin of others, just as Rahul said the Farm Laws will end up destroying MSP and PDS for the poor too. “The danger is real and cannot be negated just because Modi &amp; Co. are making fun of me,” he remarked.
Rahul slammed the Modi government for destroying key systems such as SMEs and small businesses, which were the backbone of the nation and were generating employment for lakhs of youth, on directives of big corporate houses. The trio of Modi, Ambani and Adani has ruined the structure of employment by destroying SMEs, now they are destroying the foundations of agriculture, and soon the people of India will be left with no jobs, nor food, and no future, he warned.
Calling the existing food security system a fortress for the farmers, Rahul said it had needed improvement and reforms, which is what the Congress manifesto had also promised. He cited key promises of development of the agricultural system through farmer markets, mandis every few kms, farm to fork infrastructure etc. “We never said we will destroy the whole food security system, which Modi has done with these farm laws,” he said. He warned that this will affect the entire chain of the system, rendering lakhs of people employed in the farming sector jobless, and also ending the subsidies for the poor.
Asked to comment on BJP’s claims that the farm laws, just like demonetisation and GST, were major achievements of the Modi government, Rahul told the media to go and ask the small traders and businessmen, and the farmers, whether they considered these actions to be accomplishments or failures. “If the Farm Laws are an achievement, then why are the farmers not celebrating, why are they not bursting firecrackers with joy?” he asked.
In any case, if Modi was so confident that these laws were beneficial to farmers, why didn’t he face a debate in Parliament, why did he push the laws during Covid times when the farmers cannot come out on the roads, why did he not hold a press conference or come and meet the farmers in Punjab,” quipped Rahul.