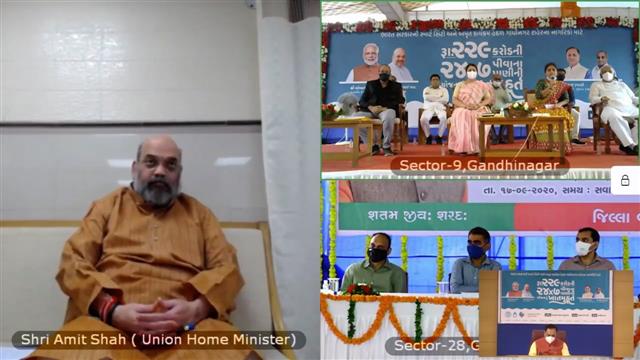 Four days after he was re-admitted to All India Institute of Medical Sciences (AIMS) for a medical check up for his Covid ailment, Home minister Amit Shah was discharged from hospital on Thursday.

Before the discharge, Shah addressed an event through video conferencing.

The Home Minister attended the inauguration of a water work scheme under smart city programme for his Gandhinagar constituency in Gujarat through video conferencing. While wishing Prime Minister Narendra Modi on his 70th birthday, the Home Minister said that the Union government was waging a strong battle against covid virus. “It’s a tough battle but gradually situation is improving,’’ he maintained.

The Home Minister was re-admitted to AIMS after complaining of breathing issue last Saturday. The hospital authorities had claimed that he was admitted for routine health check-up before the monsoon session of parliament. However, there has been no medical bulletin on the Home Minister since then.

He had tested positive for COVID-19 on August 2 and received treatment at Medanta Hospital in Gurugram.

He was discharged after testing negative on August 14 only to be re-admitted in AIIMS days after to treat his post-COVID syndromes on August 18.