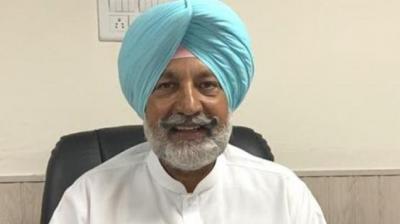 Accusing Shiromani Akali Dal President Sukhbir Singh Badal to pursuing double standards over Union Government agriculture ordinances, Punjab Health Minister Mr. Balbir Singh Sidhu said that if you are genuinely sympathetic towards the interests of the farmers and Punjab then immediately break party’s ties with the Modi government at the Center which was on the verge of destroying the farmers. He said that if SAD would not break its alliance with BJP and come out of the Union government then it could not run away from its responsibility to endorse this anti-farmer law.

Mr. Sidhu said that “a few minutes utterance of Sukhbir Badal in the Lok Sabha yesterday against the Essential Commodities Bill was meaningless as long as the Shiromani Akali Dal is a partner in the Modi government. The tragedy of the Akali Dal is that it also wants to make its mark among the farmers and at the same time, they do not want to give up even a small ‘Waziri’ (Ministry) in the central government. But his misleading policy will not succeed because now the cat is out of the bag.”

The Health Minister said that the stand taken by the President of Shiromani Akali Dal against the Essential Commodities Bill in the Lok Sabha yesterday was a new attempt to deceive the people of Punjab. The Akali Dal has taken this step following ‘behind-the-scenes agreement’ with the BJP under which the Akali Dal will oppose these ordinances just to pretend as pro-farmer and the BJP will ignore this protest in the house.

Mr. Sidhu pointed out, Sukhbir Singh Badal’s claim was totally wrong that Harsimrat Kaur Badal had raised serious concerns while Union Cabinet approving the Agriculture Ordinances, adding that the entire leadership of SAD including Sukhbir Singh Badal and Harsimrat Kaur Badal was strongly supporting the Agriculture Ordinances till two days ago. Mr. Sidhu said that the Akali Dal has even gone to the extent as they have tarnished the image of the old-aged leader Mr. Parkash Singh Badal by making his statements in favour of these ordinances.

The new attempt of protest being taken by the Akali Dal now has come out of fear of public outcry against the Agriculture Ordinances in Punjab. The Health Minister said that the new laws being framed by the Union Government in the name of agrarian reforms would severely affect small and marginal farmers. He also said that these laws were against the federal structure and spirit of the Indian Constitution. Mr. Sidhu said that it was unfortunate that the Shiromani Akali Dal, which was claiming to be a true supporter of the farmers and building a real federal structure in the country, was tarnishing its ideology and history just for the sake of a ‘Waziri’.