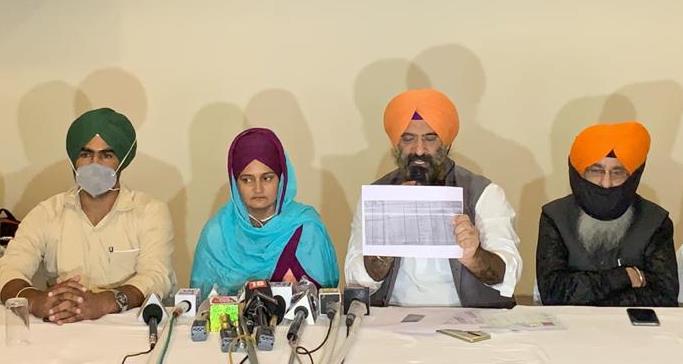 Seeking release of her husband Balwinder Singh, a Kargil war veteran, who was allegedly assaulted and arrested by police during a BJP protest rally in Kolkata last week, Karamjit Kaur on Friday said he was being “wrongfully detained” and she feared for his security.

Talking to The Tribune over telephone, Karamjit said, “He has done no harm to anyone. I fear for his security.”

“In the garb of ongoing investigation, the West Bengal Police have illegally detained my husband while deliberate attempts are being made to give a political overtone to the matter,” she said.

Karamjit along with her 16-year-old son is running from pillar to post for Balwinder’s release. The duo even visited Kolkata recently to seek justice for the retired Black Cat Commando.

“I couldn’t stay back at home and decided to fight the injustice,” said Karamjit.

Various Sikh organisations in West Bengal have also come out in support of Balwinder Singh and submitted a memorandum to Chief Minister Mamata Banerjee.

Balwinder who was serving as a personal security officer of West Bengal BJP leader Priyanshu Pandey was assaulted, his turban defiled, and later arrested by Kolkata Police for carrying a firearm during the protest rally.

In video posted on a social media, Manjinder Singh Sirsa condemned the act of local police and “unsupportive” approach of the WB Government in the matter.

He said that they would fight against the “injustice” tooth and nail and also claimed that they had been able mobilise support for the release of Balwinder Singh and if the authorities concerned did not relent, they would be forced to knock court’s door.

Rupinder Singh, who accompanied Karamjit to Kolkata, said, “We have been exploring every possible alternative for Balwinder’s release.”

“We are seeking support from all quarters to get strict punishment for police personnel who not only beat him (Balwinder) but also defiled his turban and dragged him by his hair, thereby hurting the religious sentiments of the Sikh community,” he said.

“The pistol carried by Balwinder was licensed but the West Bengal Police have applied strong sections against him which may result in his sentencing for life time,” Rupinder highlighted.

“We had sought time from West Bengal Chief Minister to seek justice in the matter but did not get any response so we decided to meet the Governor of the state, and Manjinder Sirsa, president of the DSGMC, and other local Sikh organisations have extended support to us,” he added.

Condemning the act, Jaskaran Singh Sivian, president of the Gurmat Prachand Lehar – a Bathinda-based Sikh organization, said, “The incident has hurt the religious sentiments of Sikh community. We demand unbiased investigation and justice in the matter. High-handedness of authorities against minorities would not be tolerated.”

Balwinder’s father Gurtej Singh (71) said, “In the video circulated on social media, my son could clearly be seen urging them to not defile his turban but they did it thrice and then dragged him by his hair. Nothing could be more shameful than that.”

“He stood for the identity of Sikhs, now it’s time that the community stands united to ensure his safe and secure release and strictest possible action against those who assaulted him,” he added.