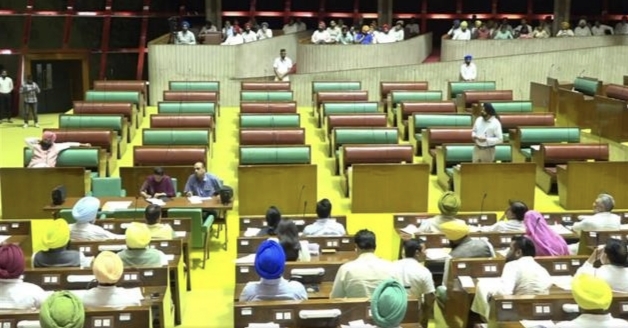 Chandigarh: Chief Minister Bhagwant Mann’s government today won the confidence motion with a thumping majority during the last day of the Punjab Assembly session. The Congress walked out of the discussion and the Bharatiya Janata Party was remained absent during the voting.

The AAP government claimed that Shiromani Akali Dal (SAD) and the BSP also did not oppose the resolution. Congress MLAs walked out of the session terming it an activity to cover of poor performance and deteriorating law and order situation in the Punjab.

Leader of Opposition Partap Singh Bajwa accused AAP and CM Mann of ignoring Punjab while focusing on the elections of other states due to which crime rate is incessantly rising.

After Bhagwant Mann’s speech, the vote on the confidence motion was held.

A total of 93 MLAs voted in favour of the resolution. Bhagwant Mann said, “I congratulate the people of Punjab for renaming the Mohali airport as Shaheed Bhagat Singh International Airport. I will try that halwara airport will be renamed as Kartar Singh Sara.”

After reports that Akali MLA Manpreet Ayali along with BSP MLA casted vote in the favour of the motion, Akali Dal counter this claims and said that there was no need to bring a confidence motion when AAP already enjoys an overwhelming majority in the assembly and no legislator has asked it to prove its majority.

In a statement, SAD MLA Ayali said, “Nothing can be further from the truth. It is also unfortunate if anything else except my strident opposition has been recorded in the Vidhan Sabha records. I urge Speaker Kultar Singh Sidhwan to correct this falsity immediately and reflect the correct position in the case in the assembly records.”