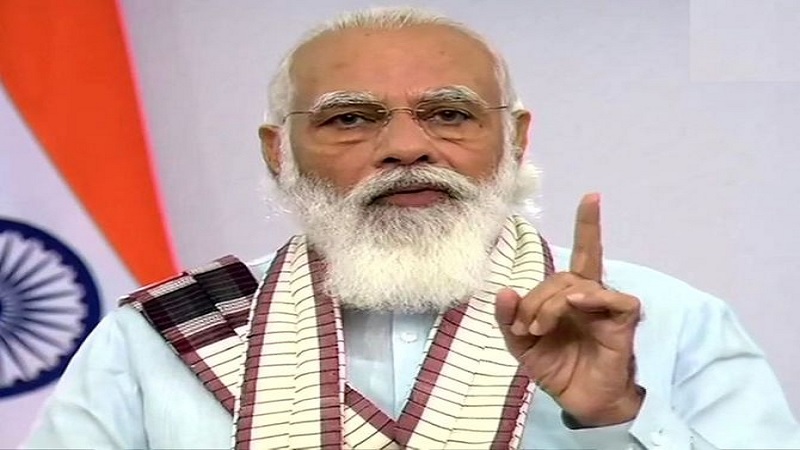 No room for laxity in fight against Covid-19, adhere to precautions: PM Modi

Seeking to remind the people there is no room for complacency or slackness in adhering to precautions in the fight against Covid-19, Prime Minister Narendra Modi underscored the danger from the virus is prevalent and there cannot be any laxity till the vaccine arrives.

Noticing a growing tendency among the people who believe the virus is gone or is not as dangerous, PM Modi cited latest instances in countries like the United States, Brazil and Europe where the disease resurged after dipping.

Stating that people can be seen resuming activities forgoing precautions as wearing of a mask, he said such attitude would not only put the individual at risk but also endanger their family, their children and elders.

While the Government, he said, was able to contain the spread of the pandemic with the cooperation of the people during the last nearly eight months, the PM reminded that the disease is still around and with festival season approaching there is need to maintain abundant caution all around.

The collective task of fighting the scourge is incomplete, he said, reciting a couplet of Kabir that said there is no point of drawing satisfaction on seeing the crops bloom in the field till the harvest is brought home. With Dussehra around, he also quoted a verse from Ramcharitra Manas to convey the message that people should not take any disease lightly until it is cured.

PM Modi said since the start of ‘Janata Curfew’ on March 22 till date, the country has travelled a long distance in this fight against Covid-19 and today due to the measures it has one of the lowest rates both in terms of cases or fatality.

As against per 10 lakh, India has 5,500 cases while US and Brazil records above 25,000 and the death rate is 83 as against 600 plus in countries like the US, Brazil, Spain and many resource rich countries.

The world today is one in the fight to save humans from the virus and vaccines are in various stages of development. Indian scientists too are working. The Government, he emphasised, is already on the move to work on a plan so that it reaches every citizen.

PM Modi urged all citizens especially those in the media and active on social media to join efforts in this campaign to make people aware of the need to adhere to precautions like wearing a mask, maintain social distance and frequent hand washing.