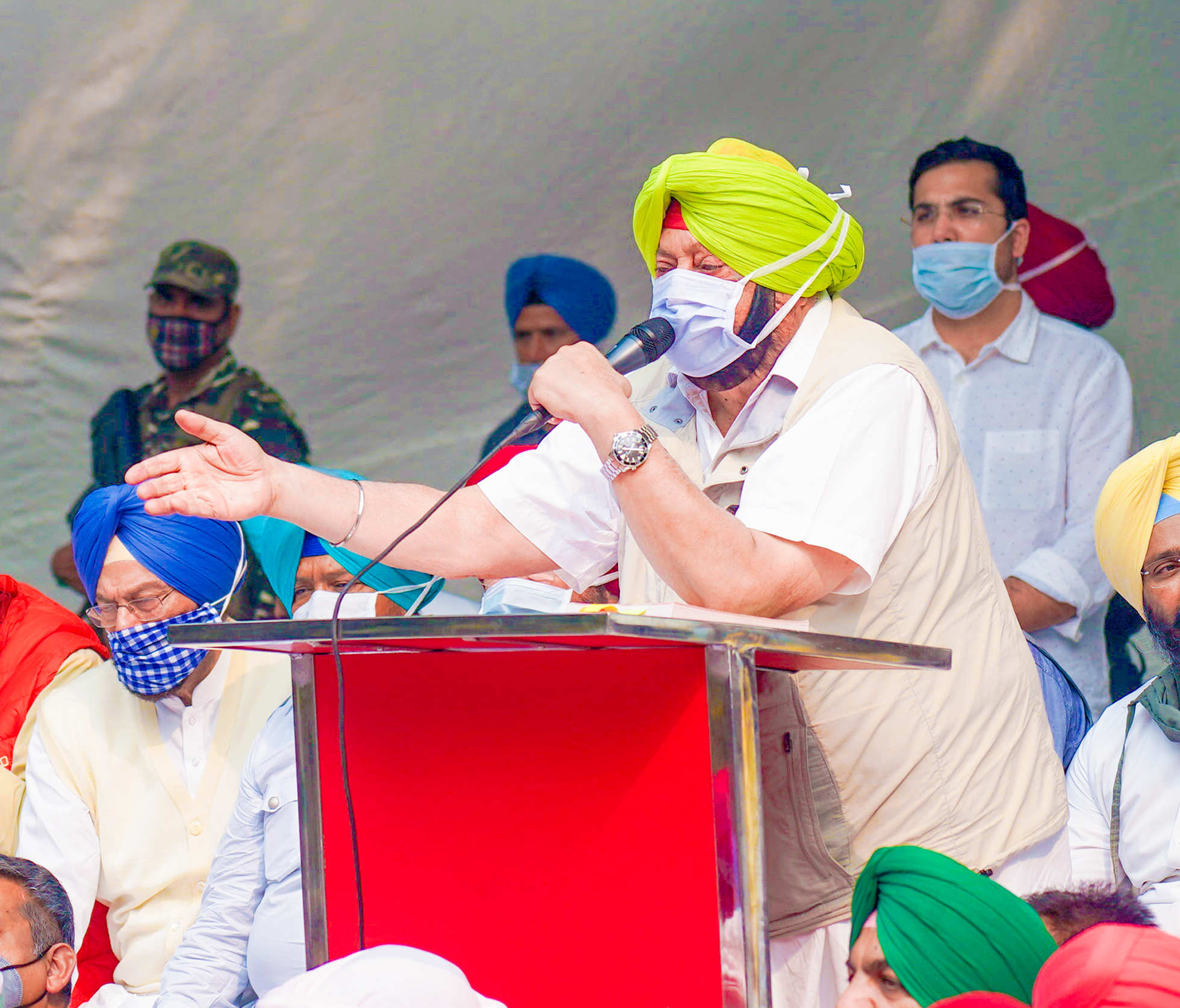 ‘Not in Delhi to disturb peace but to preserve it,’ declares Punjab CM

Rejecting outright allegations of `anti-nationalism’ against Punjab’s farmers, Chief Minister Captain Amarinder Singh on Wednesday said he was not in Delhi to confront the Centre but to fight for justice for the poor farmers, whose livelihood at stake due to the central farm laws.

Asserting that “we are here not to disturb peace but to preserve it,” Captain Amarinder said he and other MLAs from Punjab were forced to come to Delhi as the President had declined their request for a meeting on the plea that the state amendment Bills were still lying with the Governor. Though they had earlier planned to hold a relay dharna at Rajghat they had to shift to Jantar Mantar as Delhi Police imposed Section 144 at the memorial of the Father of the Nation, he said.

The Chief Minister said he knew the Governor had still not forwarded the Bills, even though he had no role to play in the matter, and had wanted to meet the President to brief him on Punjab’s concerns about national security and food security. The Chief Minister said it was his duty to apprise the head of the country of the situation on the national and food security front. As far as the state’s Bills were concerned, he expressed the hope that the President will give full assent to them, following the precedent of the then President Pranab Mukherjee, who had assented the Bills passed by BJP-ruled states under Article 254 (II) on suggestion from Arun Jaitley.

Addressing the dharna of MLAs from the state at Jantar Mantar, where he reached after paying his respects at Rajghat along with Congress MPs from the state, the Chief Minister expressed the hope that the central government will look at Punjab and its problems in the backdrop of the sacrifices made by Punjabis through the decades. He trashed any suggestion of Punjab’s farmers resorting to anti-national activities, pointing out that their agitation against the Farm Laws had been completely peaceful.

Punjabis are deployed at the borders, fighting for the country, in many tough terrains and have given their blood to ensure the nation’s safety and security, Captain Amarinder observed, adding that no citizen of Punjab could ever think about indulging in any anti-national activity. He reiterated his warning that any move by a government to tinker with religion or livelihood of the people was bound to trigger resentment and anger. The farmers are protesting because the new laws of the central government will destroy them and snatch every morsel of food from the mouths of their children, he said, adding that “we are all ready to give our blood for the nation, as we Punjabis have always done,”

The Chief Minister warned that failure to resolve the issues of the farmers would lead to unrest, which both China and Pakistan would try to exploit to the detriment of national security, he said, urging the Centre to look at the plight of the small and marginal farmers, who constitute 75% of Punjab’s farming community. He said that as Home Minister, he was aware of the threat at the borders, with Pakistan smuggling drugs and weapons for terrorists and gangsters into Punjab through 1-3 drones every day. If trouble erupts in Punjab, the entire nation’s security would be at stake, he added.

Highlighting the crisis faced by Punjab due to the decision of the Railways not to play goods trains in the state, the Chief Minister said contrary to the misinformation being spread, tracks were currently blocked at only two places, which were off the main lines and connected to two private plants. The farmers are fighting the corporates, which is why they are not allowing supplies on these two track, he said, adding that all the other lines were open. He said he had spoken to Railway Minster Piyush Goyal and even assured him that the Punjab Police would help the RPF maintain security at the stations and along the tracks to allow goods trains.

Questioning the rationale behind the Centre’s refusal to allow trains to ply in Punjab, Captain Amarinder said this decision was obstructing movement of essential supplies not just in Punjab, which had run out of coal and power, storage for foodgrains and fertiliser, but also to other states, including the armed forces in Ladakh and Kashmir.

The Chief Minister slammed the Centre over the ill-conceived farm laws, which would destroy the established system of marketing of food produce through close-knit relations between farmers and Arhityas. With just 1.57% of the country’s total population, Punjab was contributing 40% to the national food pool as part of the tried and tested system, which the BJP-led central government was trying to destroy for the benefit of a few corporates, he said. The farm laws will specially hit the poor small and marginalised farmers, who constitute 75% of Punjab’s farmers, he said. In any case, he said the open market system exists even today, and cited the example of Punjab’s kinnows that are being sold in many other states.