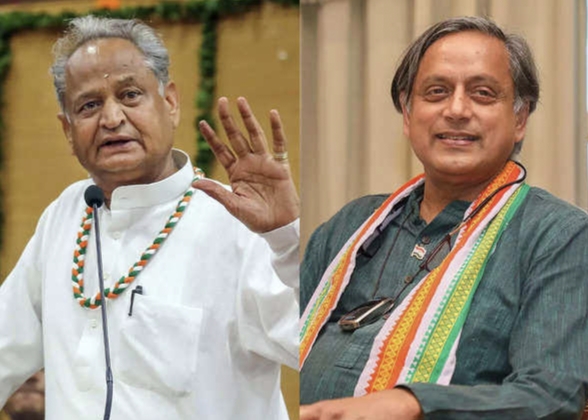 New Delhi: A notification for the election of the party president will be issued by the Central Election Authority of the Congress tomorrow. The process of filing nominations will begin on September 24 and will continue till September 30. The election will be held on October 17, while the results will be announced on October 19.

The main contest is likely to be between Lok Sabha MP Shashi Tharoor and Rajasthan Chief Minister Ashok Gehlot. Meanwhile, Gehlot today clearly indicated that he would file his nomination for the election of congress president.

Gehlot also met Sonia Gandhi yesterday. Tharoor met Central Election Authority Chairman Madhusudan Mistry and discussed the formalities related to the nomination. Meanwhile, the Punjab and Telangana units of the Congress have passed resolutions demanding that Rahul Gandhi be made the party president. So far, around a dozen Pradesh Congress Committees (PCC) have come out in support of Gandhi. In Kochi, Jairam Ramesh said no one needs permission from Sonia Gandhi to contest for the post of party president.

Gehlot, who arrived in Delhi from Jaipur to meet party interim president Sonia Gandhi, told reporters that he would take decisions to strengthen the Congress.

“The party and the high command have given me everything. I have held various positions for the last 40-50 years. For me, the position is not important, I will fulfill any responsibility that I get.”

Gehlot asserted that not only the Gandhi family but other Congress members have also reposed faith in him.