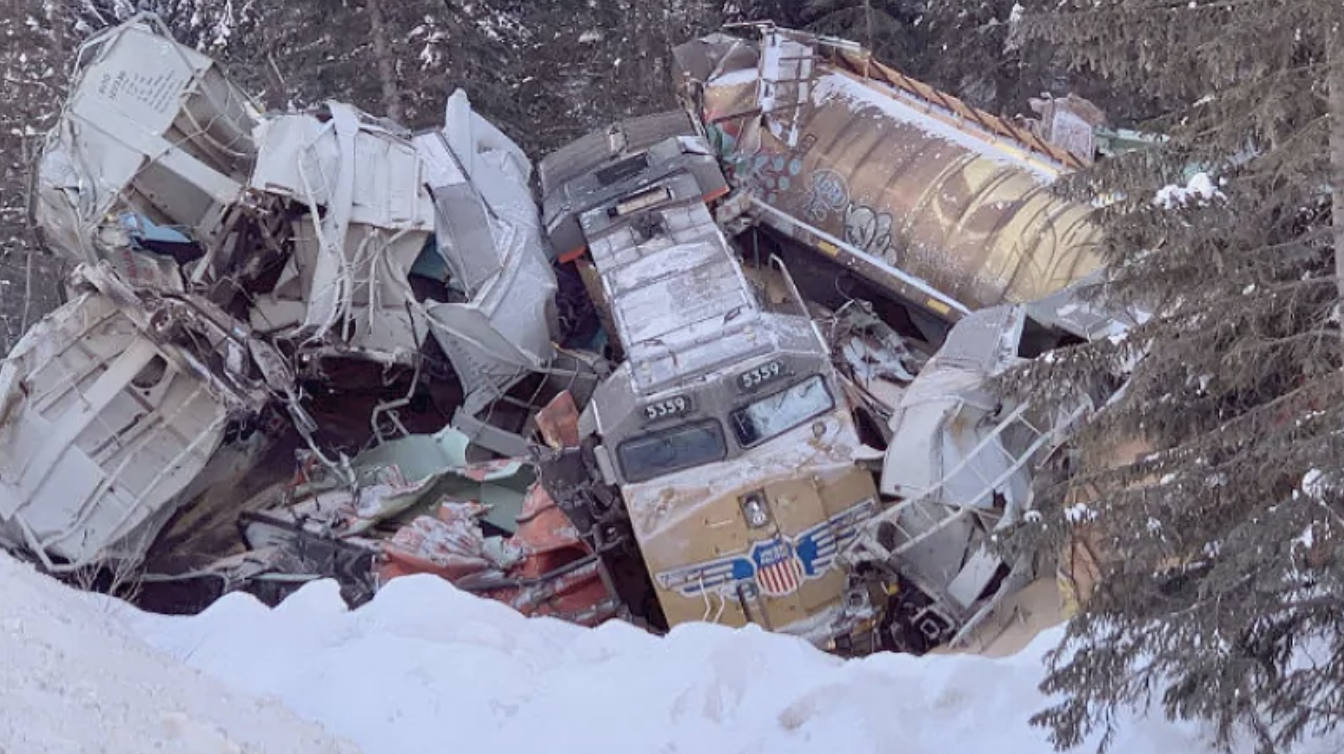 On 3 February 2019, a CP unit grain train with 112 loaded hopper cars was travelling from Calgary, AB to Vancouver, BC. While descending the steep 13.5-mile-long Field Hill, the inbound train crew was not able to maintain the required speed and applied the brakes in emergency, bringing the train to a stop at 9:49 pm. The brake cylinder pressure retaining valves were set on 84 cars to retain residual air pressure, which would facilitate getting the train underway again, allowing the air brakes to recharge as it continued its descent. A relief crew was called in to replace the inbound crew as they were at the end of their shift. During this time, the train’s air brake system had been leaking brake cylinder pressure, reducing the capacity to keep the train stopped on the grade. Shortly after the relief crew took over, at 12:42 am on 4 February, the train began to creep forward and accelerate uncontrolled down the steep grade. The train reached 53 mph, and was unable to negotiate a sharp curve, resulting in the derailment of two locomotives and 99 cars, and the three relief crew members being fatally injured.

The investigation found that the brake cylinders on the freight cars were leaking compressed air, a situation made worse by their age and condition, and exposure to extreme cold temperatures over time. It was determined that after being stationary on the hill for around 3 hours, air leakage reached a critical threshold and the brakes could no longer hold the train on the steep grade.

The inbound locomotive engineer had observed indications of brake system anomalies. Although these were discussed with the trainmaster, they were not recognized as problematic. Additionally, because the situation was the first emergency stop, critical factors were not considered, and only the pressure retaining valves were applied, rather than the retaining valves and hand brakes. In this instance, the trainmaster’s training and experience did not adequately prepare him to evaluate the circumstances or to make the decision he was tasked with.

The Transportation Safety Board of Canada also issued 3 Rail Safety Advisories to communicate safety critical information to Transport Canada as the investigation was unfolding. Those advisories urged Transport Canada to address the following deficiencies:

Following the occurrence, TC introduced several initiatives, and CP proceeded, among other things, to remove over 5000 grain cars from service for repair.