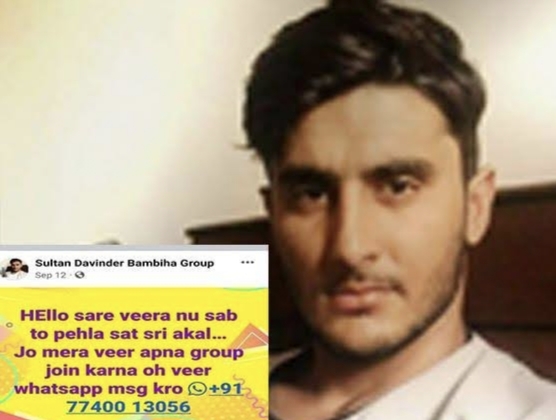 Chandigarh: In a bizarre incident, online recruitment of gangsters is now taking place in Punjab. To connect the youth with their gang, the Bambiha gang has issued a WhatsApp number by writing a post on Facebook.

A post has been put from the account of Sultan Davinder Bambiha Group, in which it is written that the brothers who want to join the gang, they can contact by WhatsApp No. 77400-13056.

On one hand gangsters are publicly releasing numbers on Facebook and threats to people, on another hand Punjab Police are making claims to end gangsterism. Gangsters often show their fame by posting on Facebook and by making videos, presenting themselves as role model heroes, so that young people are attracted to see them and join them in the world of crime.

In the year 2016, Bathinda police encountered gangster Davinder Bambiha in Rampura Phool area. Davinder Bambiha, who was killed in an encounter with the police, was known as a sharp shooter from the beginning. This gangster was absconding from police custody for 17 months and was threatening to kill his enemies by writing posts on FB.

Notorious shooter Davinder Singh Bambiha and his accomplice Sarvjit Singh alias Sharani were wanted by the police of Gujarat and Maharashtra including Punjab. There are many cases registered against them including the killing of his uncle and nephew. On September 14, 2013, both the accused had escaped by dodging the police during the production in Faridkot in the double murder case.

Bambiha was caught by the Faridkot police on 11 June 2014 in Ludhiana. There was a cross-firing between the police and Bambiha, in which Bambiha was shot on the side, but the police could not keep Bambiha in jail for long.

On 20 January 2015, Bambiha along with four of his accomplices escaped from Ludhiana Central Jail while going to Muktsar production. Since then Bambiha was out of the grip of the police before being killed. It is being said that at present two gangsters are operating the Bambiha gang from the USA.