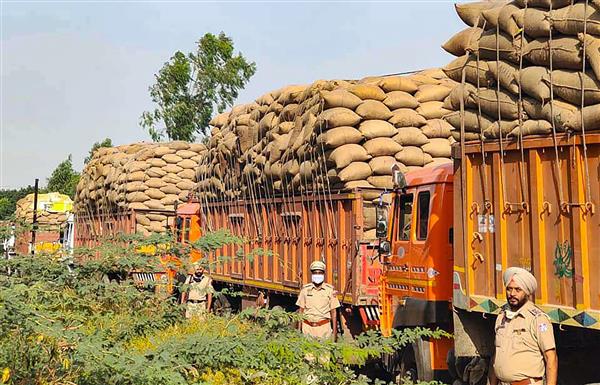 Paddy from other states smuggled into Punjab for higher MSP

The Bathinda police have intercepted four trucks and two tractors transporting paddy from other states for illegal sale in Punjab. However, they managed to arrest only one driver as all others managed to escape. Another driver managed to flee along with the truck. Police have registered four cases in the district.

In the first case, acting on tip-off, police intercepted a truck (RJ 14 GE 0357) at Jagah Ram Tirath village in Talwandi Sabo area and seized 25 tonne of paddy. Police have arrested driver Kuldeep Singh of Bhagwanpura and booked owner of DR Industries, Bulandshahr, in Uttar Pradesh and owner of BCL Industries, Bathinda, under Section 420 and 120 B of IPC.

In the second case, two trucks were caught carrying paddy from other states at Singo village in Talwandi Sabo area. Police seized truck (PB 05 S 9599) and recovered paddy. However, the driver managed to escape from the spot. Even the driver of another truck (RJ 19 GC 5819) also escaped from the spot along with the truck. Police have booked both truck drivers, owner Pushkar Trading Company, Fatehpuri in Uttar Pradesh and owner of AB Agro Foods, Malout in Muktsar district.

In the third case, police stopped a truck (PB 11 AX 9425) and seized 36 tonne 55 kg paddy coming from another state. The truck driver managed to escape from the spot. Police have registered a case against the truck driver, owner of Kailash Trading Company, Sirsa, and owner of SS Industries in Jalalabad in Fazilka district at Talwandi Sabo police station.

In yet another case, police intercepted two tractors (HR 44 L 2396) and (HR 44 L 9454) and seized 36 tonne 312 kg paddy coming from Rajasthan. However, no arrests have been made in this case. Police have registered a case against Shivrattan of Hanumangarh in Rajasthan, Rajinder Singh, Gurtej Singh of Ellenabad in Haryana and Sanju of Dabwali in Haryana at Sangat police station.

In the initial probe, it has come out that traders purchase paddy at lower rates outside Punjab and sell it at much higher price in grain markets across Punjab, causing losses to the exchequer.

Bathinda SSP Bhupinderjit Singh Virk said: “Eight police posts have been made on the roads coming from adjoining Haryana in the districts and teams have been instructed to check the vehicles coming from Haryana. Police will arrest those who have escaped.”