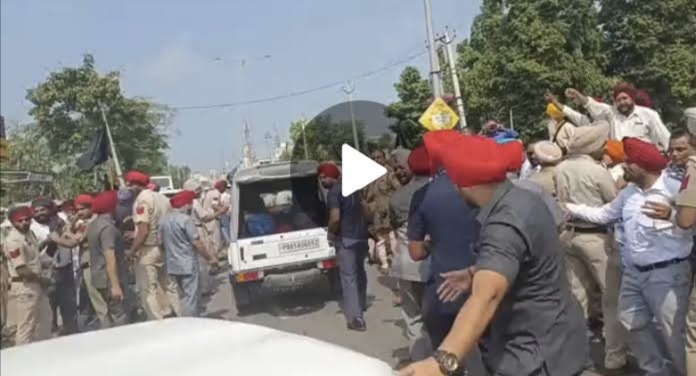 Sangrur: Punjab Chief Minister Bhagwant Mann’s wife Dr. Gurpreet Kaur was besieged in Sangrur by the ex-servicemen against scrapping of the guardians of governance (GoG) scheme.

She was here to inaugurate the office of Sangrur MLA Narinder Bharaj.

According to the information, when convoy of Dr Gurpreet was on the way back after the programme, it was gheraoed by the protesting ex-servicemen.

During the siege, there was a scuffle between the police and ex-servicemen to safely evacuate the vehicles of Gurpreet Kaur and mother of CM Harpal Kaur, but during the heavy struggle, the police succeeded in pulling out the vehicles.

In the meantime, there was a scuffle broke out between the police and the GOG ex-servicemen.

Former Chief Minister Captain Amarinder Singh, who himself was an ex-serviceman, had appointed 4,300 GoGs in 2017. But the current government had scrapped it.

Congress also shared a video of CM Mann’s wife and sister while reportedly buying jewelry from a popular store.