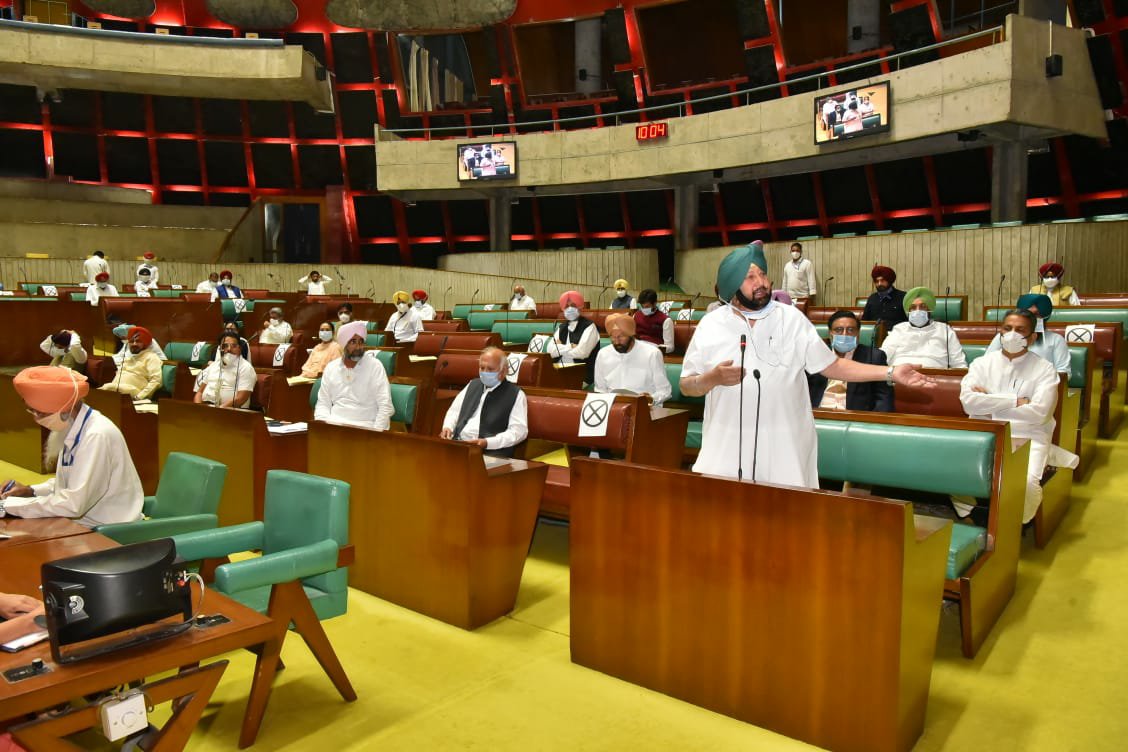 Chandigarh, October 20: In a major move to protect the state’s farmers and agriculture, Chief Minister Captain Amarinder Singh on Tuesday presented in the Vidhan Sabha a draft resolution rejecting outright the Centre’s anti-farmer Laws and the proposed Electricity Amendment Bill, with an appeal to all parties in the state to rise above political interests in the spirit of saving Punjab.

The draft resolution seeks annulment of the Farm Laws and the proposed Electricity Bill, as well as promulgation of “a fresh ordinance making the procurement of food grains on the Minimum Support Price a statutory right of the farmers and continue with procurement by Government of India through FCI and other such agencies.”

Regretting that several legislators indulged in frivolous activities on Monday to gain political mileage, with some coming in tractors and some spending the night in the Assembly precincts in protest against non-receipt of his government’s Bills, the Chief Minister said he had signed the same at 9.30 p.m. after extensive discussions and consultations with various experts. Such delays in sharing copies of Bills happen in emergent session, he said, pointing to something similar happening when his government had brought in the Punjab Termination of Water Agreements Act during his last tenure in 2004.

Captain Amarinder said the Bills being presented today would form the basis of the state’s legal battle ahead and, hence, needed to be thoroughly vetted before presentation.

The draft resolution expresses the deep regret of the State Legislative Assembly over the “callous and inconsiderate attitude of the Government of India in attending to the concerns of the farming community on recent allegedly farm legislation enacted by them.” It reads that the Assembly is constrained to unanimously reject the three (Farm) legislations and the proposed Electricity (Amendment) Bill, 2020.

Referring to The Farmers’ Produce Trade and Commerce (Promotion and Facilitation) Act, 2020; The Farmers (Empowerment and Protection) Agreement on Price Assurance and Farm Services Act, 2020; and The Essential Commodities (Amendment) Act, 2020, the draft resolution notes that the Union Government had converted the relevant Farm Ordinances into Acts and notified the same on September 24 and 26 even though the concerns and sentiments of the House were conveyed to the Prime Minister of India through letter No. CMO/Confi-2020/62/35 of 14th September 2020 by the Chief Minister.

“These three legislations along with the proposed Electricity (Amendment) Bill, 2020 are clearly against the interests of farmers and landless workers, and time-tested agriculture marketing system established not only in Punjab but also in original green revolution areas of Punjab, Haryana, and Western UP,” it said, adding that the Government of India had clearly enacted trade legislations and not farm legislations.

Further, said the draft resolution, these laws are also against the Constitution of India (Entry 14 List-II), which comprises agriculture as a subject of the State. These legislations are a direct attack, and use of subterfuge to encroach upon the functions and the powers of the States, as enshrined in the country’s Constitution, said the draft resolution, read out by the Speaker.