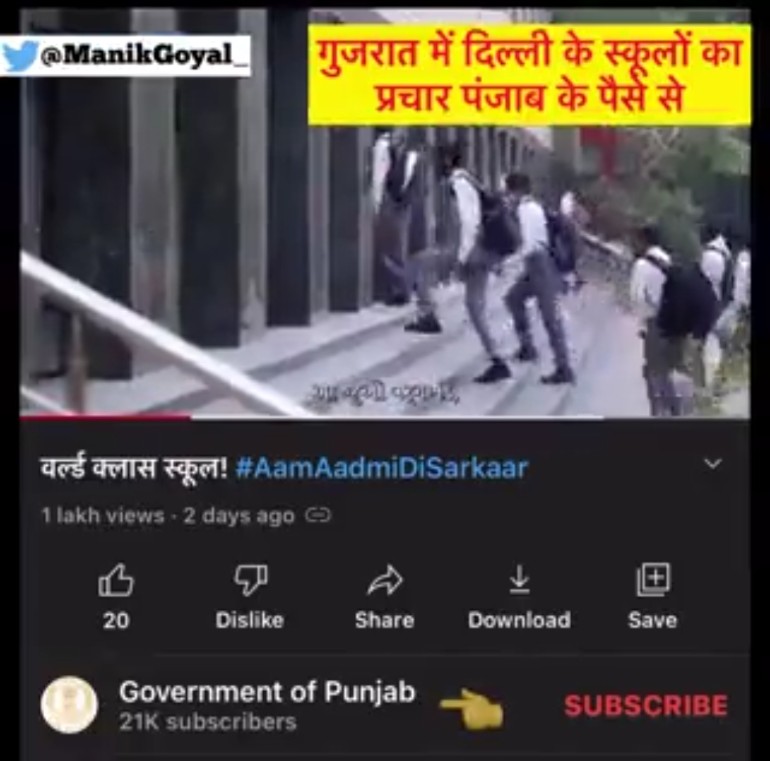 Manik Goel, a well-known RTI activist from Punjab has said that Delhi government schools are being promoted in Gujarat with the money of Punjabis. Assembly elections are due in Gujarat in the last month of the year, for which the AAP party is running a massive campaign.

He said that the AAP is promoting schools in Delhi in Gujarat through google and youtube ads. A video has also been shared by him in this regard.

Asserting that public funds could not be squandered in this manner, the SAD president demanded an immediate stop to all advertisements being issued by the Punjab government to advertise the failed Delhi Model of school education in Gujarat to woo the electorate in the run up to the assembly elections. “No government in the history of Punjab has derided itself in this manner and hurt Punjabi pride and prestige by using government funds to advertise the achievements of a second State in a third State for electoral rewards”.

In a statement here, Sukhbir Badal said it was shocking that the Bhagwant Mann government was following up crores spent in eulogizing AAP Convener Arvind Kejriwal in Gujarat and Himachal Pradesh with advertisements worth several lakhs every day on the social media. “The government has already spent a few hundred crore on this exercise and has kept a budget of Rs 700 crore in the current financial year for this propaganda which includes paid news”.

Asking the chief minister not to insult Punjabis in his over eagerness to please his boss – Kejriwal, Badal said Punjab schools as well as the Punjab school education system had been ranked better than Delhi in three consecutive national surveys including the National Achievement Survey, Performance Grading Index Survey and the Foundation Learning Study.

“It is clear that the much hyped Delhi Model of school education, which was used as a propaganda tool by the AAP in Punjab, is a complete failure. The chief minister should stop this fake publicity immediately and utilize the saved funds for the welfare of Punjabis”.

Stressing that this Rs 700 crore could have been put to better use, Badal said the agriculture sector was in a crisis with farmers not being paid compensation for crop damage or incentive of Rs 1,500 per acre for direct seeding of paddy and Rs 2,500 per acre to abstain from burning paddy stubble.