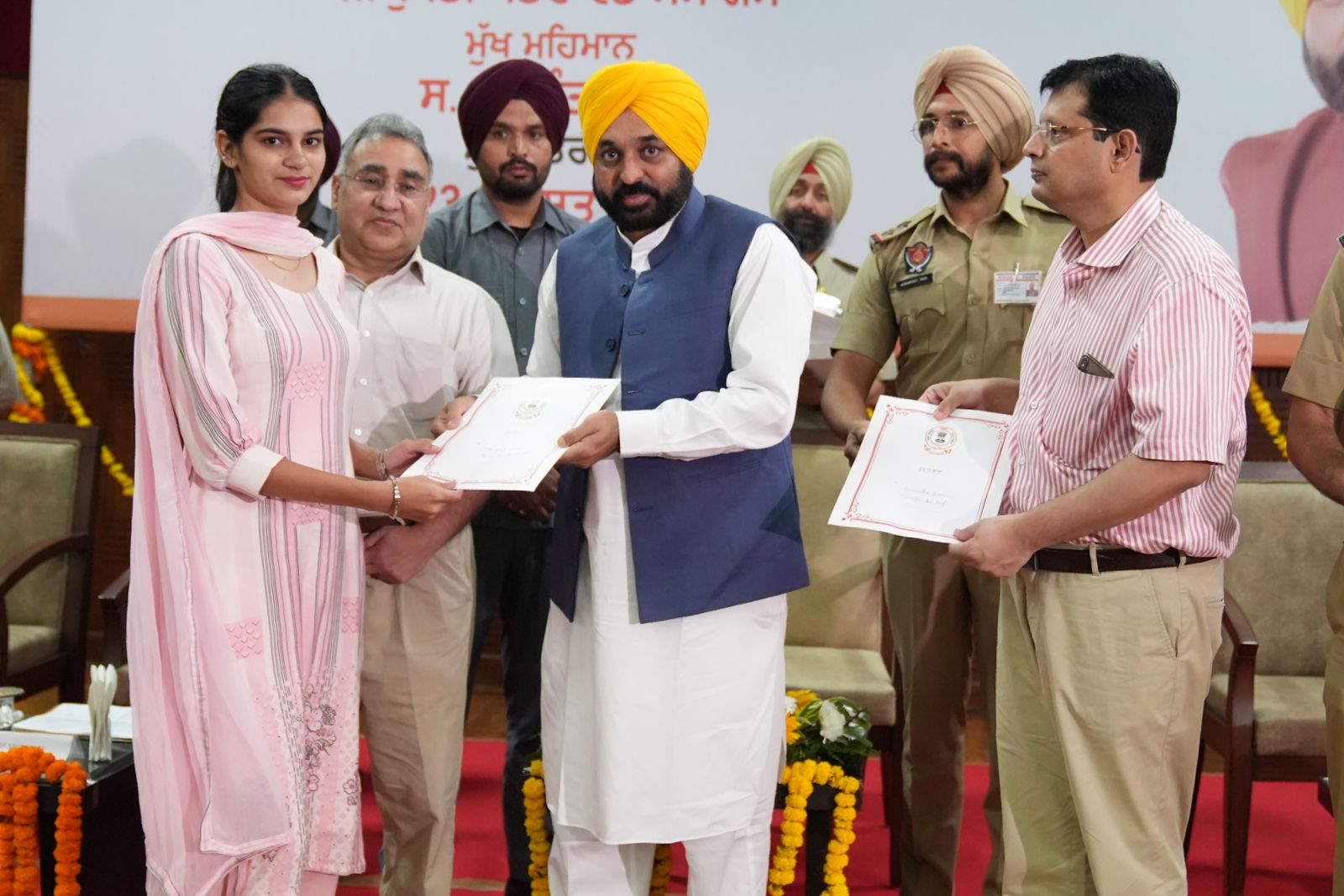 Chandigarh: Punjab Chief Minister Bhagwant Mann on Tuesday said that in merely five months of assuming charge the Aam Aadmi government in the state has handed over appointment letters of government jobs to around 17,313 youth in the state.

Addressing the gathering here while handing over appointment letters to newly recruited 4358 constables in Punjab Police, the Chief Minister said that the state government has conducted the entire recruitment process in a transparent and fair manner. He asserted that merit had been the only criteria of selection in this recruitment drive. Bhagwant Mann further said that recruitment for filling 5739 more vacant posts of the Police department will be also embarked soon.

Exhorting the newly recruited constables in Punjab Police to update their expertise for eliminating crime and criminals from the state, the Chief Minister emphasised that it is a matter of great pride and satisfaction for them that all the recruits are highly qualified and well equipped with academic and technical knowledge. He asserted that this qualification can be very helpful with dealing with the crime and criminals in today’s era of technological advancement. However, Bhagwant Mann further said that as the criminals are devising new techniques of committing crime so the cops should also update their expertise for tackling crime and criminals efficaciously.

The Chief Minister said that he is elated to learn that youth with high academic qualifications have been successfully recruited for this challenging job. He revealed that out total 4358 candidates 103 are post graduates, 2607 are graduates and 1648 are senior secondary pass outs. Similarly, Bhagwant Mann said that 2930 constables fall in age group of 18-25 years whereas 816 fall in age group of 26-30 years.

Congratulating the girls for excelling in every field, the Chief Minister asserted that though out of the total advertised posts 33% were reserved for the girls but due to their penchant for moving ahead the girls have got recruitment for more than posts reserved for them in the Punjab Police due to their enormous capabilities and capacities. He further said that this a positive sign for the development of a progressive and harmonious society. Bhagwant Mann emphasised that the state government is committed for ensuring the well being of the girls by imparting quality education to them.

Recalling the immense contribution of the state, the Chief Minister said that more than 90% of the martyrs who had attained martyrdom during the freedom struggle hailed from the state. Likewise, he said that even today the brave soldiers from state sacrifice their lives while protecting the borders of country. Bhagwant Mann emphasised that youth of the state have imbibed this spirit from great Sikh Gurus who have taught us to fight against tyranny, oppression and injustice.

Congratulating the new constables, the Chief Minister said that their selection to this job is result of their hard work, consistency and commitment. He asserted that the youth who have worked hard deserve this post as they have cleared the cut throat competition totally on merit basis. Bhagwant Mann further said that more such transparent recruitments are in pipeline and will be completed soon.