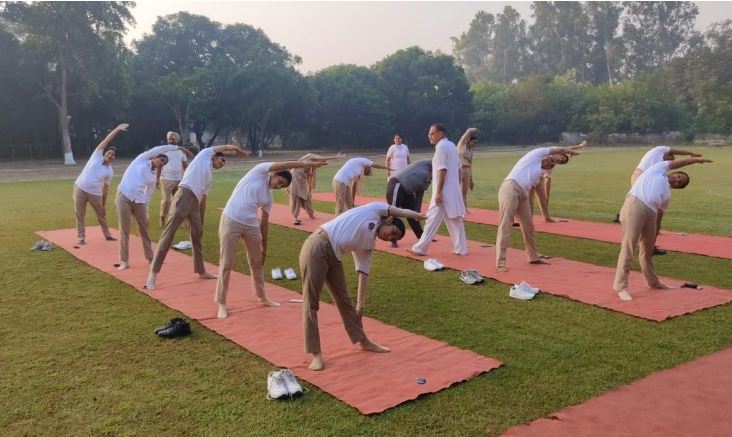 Aiming to make the Punjab Police personnel hale and hearty, Punjab Police organised ‘Yoga Over Webinar’ program for women police officers in collaboration with the Round Glass foundation. This fitness program was designed to deal with stress problems especially in view of COVID-19 pandemic.

Disclosing this here today, a spokesperson of Punjab Police said that it has been observed that women police officials facing high levels of stress during the time of Covid-19 pandemic as they are performing duties at both the workplace and home. The COVID-19 crisis has contributed to the stress and anxiety manifold. In this regard, orders were issued that police personal over 55 years of age or those with pre-existing medical conditions and women officials with kids below the age of 5 years, would not to be deployed on the frontline duties.

Giving details ADGP, Community Affairs Division, Gurpreet Deo informed that the Community Affairs Division under the guidance of DGP Punjab Dinkar Gupta has partnered with the RoundGlass foundation and started ‘Yoga Over Webinar’ program for women Punjab Police officers. He added that Dinkar Gupta has always given utmost priority to the welfare of the Police personnel during the pandemic and our current focus is on the wellbeing of our frontline workers.

She further revealed that studies have shown that Yoga is one of the most effective practices to cope up with the current stressful environment. Yoga and meditation practice can provide the tools to women Police officers to cope with stress.

ADGP Gurpreet Deo stated that the first one hour of Yoga webinar session was attended by 400 women Police officials. Veteran Yoga instructor Suchint Sodhi, has offered her services free of cost to the Punjab Police under the aegis of RoundGlass Foundation wherein three months module of virtual Yoga classes for Punjab Police officers across all districts of Punjab has been developed. Giving details she added that it would be a 45 minutes Yoga class, five days a week from 7 am to 8 am followed by 20 days self practice Yoga at home.

It is pertinent to mention here that the programme has received enormous appreciation from the participating women Police officials introduced to a new way of life and equipped to deal with the high amount of stress that women Police officers often have to face on account of the tough nature of policing and requirement of women officials to multitask and balance both work and home responsibilities. She informed that it has been planned that the programme would be extended to the 80,000 Punjab Police personnel in the next phase.