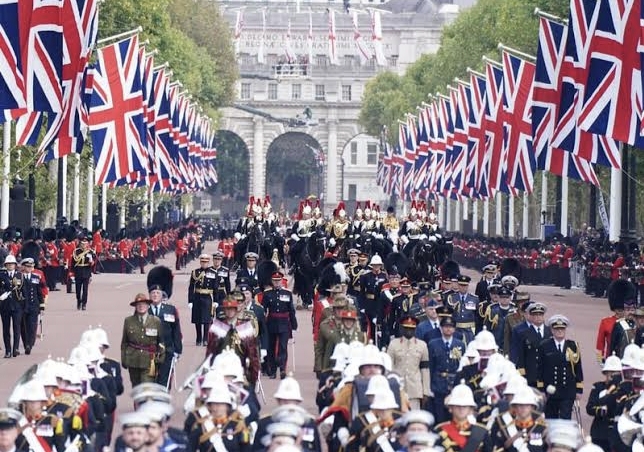 London: Million of world leaders and members of the Royal Family along with mourners have paid their final respects to Queen Elizabeth II on Monday as Britain’s longest-serving monarch began her final journey to Wellington Arch.

The Queen’s funeral approached an end with the British national anthem, “God Save the King”, has been sung inside Westminster Abbey.

“The Cavalry Last Post is sounded by the State Trumpeters of the Household Cavalry before the Nation fell silent in Remembrance of Her Majesty The Queen,” The Royal Family said.

Earlier, the Queen’s coffin was taken out of Westminster Abbey after funeral service. Queen Elizabeth II’s funeral has concluded. It went through London to Wellington Arch, from where the Queen was taken to Windsor for burial.

King Charles-III and the Queen Consort, Camilla, led the royal family behind the Queen’s coffin.

Buckingham Palace staff gathered in front of the building as Queen Elizabeth II’s coffin passed through the Queen Victoria Memorial.

The King and Queen Consort, the Prince and Princess of Wales and other members of the royal family leave the car after the procession, bells rang in Westminster.