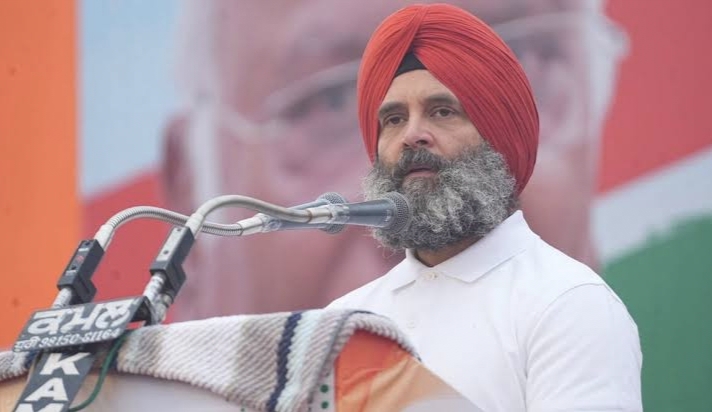 Chandigarh: Congress leader Rahul Gandhi on Wednesday paid obeisance at Gurdwara Fatehgarh Sahib before embarking on the ‘Bharat Jodo Yatra’ in Punjab. During this, Rahul Gandhi was seen wearing a turban and wearing a half-sleeved T-shirt.

Gandhi was accompanied by Punjab Congress chief Amarinder Singh Raja Warring, LoP Partap Singh Bajwa and other party leaders. Gandhi also paid obeisance at the Golden Temple in Amritsar on Tuesday after concluding the Haryana leg of the yatra in Ambala district.

Congress leader Rahul Gandhi reached Sirhind in Fatehgarh Sahib on Tuesday evening and stayed there for the night. A large number of party workers had gathered here for the yatra amid the harsh winter.

As per the schedule of the Punjab-phase of the yatra, it will start from Sirhind in Fatehgarh Sahib and pass through Mandi Gobindgarh, Khanna, Sahnewal, Ludhiana, Goraya, Phagwara, Jalandhar, Dasua and Mukerian.

The party will hold a rally in Pathankot on January 19 before the yatra enters Jammu and Kashmir. Rahul will walk for three hours each in the morning and evening to cover a distance of 25 km.

The yatra will end on reaching Srinagar by January 30

The yatra, which started on September 7 from Kanyakumari in Tamil Nadu, will conclude on its arrival in Srinagar by January 30, where Gandhi will hoist the national flag in the summer capital of Jammu and Kashmir.

Addressing the beginning of the yatra, Rahul Gandhi said that hatred is being spread in the country. RSS-BJP people are engaged in fighting one religion with another, one language with another. They have spoilt the atmosphere of the country.

Meanwhile, police and security agencies in Punjab are on alert in view of Rahul Gandhi’s journey on foot.