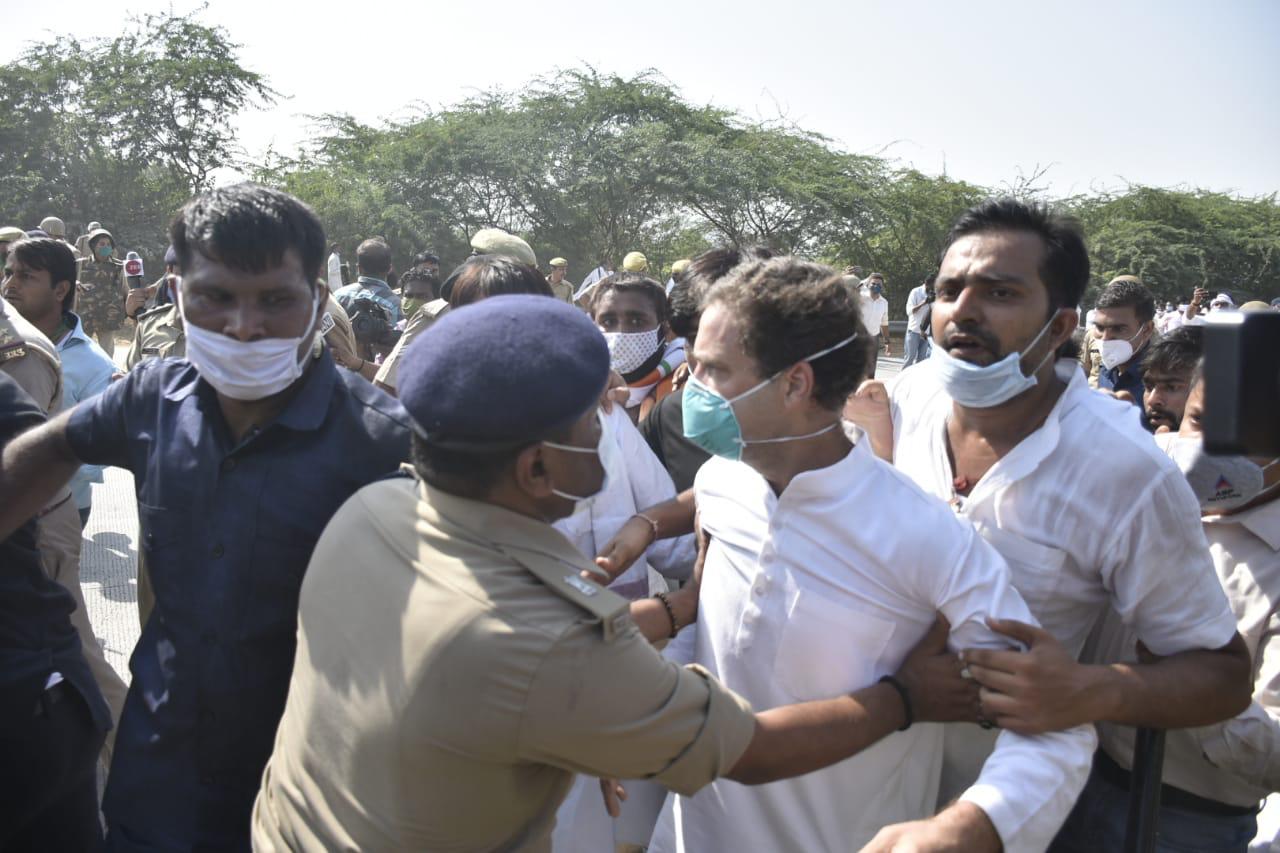 Congress leaders Rahul Gandhi and Priyanka Gandhi Vadra were on Thursday detained by the Uttar Pradesh police after they were stopped on the Yamuna Expressway in Greater Noida while walking towards Hathras to meet the rape victim’s family.

Sources said they were taken away in a police jeep and kept in a guest house for sometime after which they were release. They are now headed back towards Delhi escorted by the UP police, they said.

Rahul Gandhi also fell down in the scuffle after police tried to stop him and his supporters from proceeding on the Yamuna Expressway near the Jewar toll plaza. Pictures of the incident were shared by the party.

The Congress had said that the Gandhis were arrested by the police.

Later Rahul Gandhi told the media: “Just now police pushed me, lathicharged me and threw me on the ground. I want to ask, can only (Narendra) Modiji walk in this country? Can’t a normal person walk? Our vehicle was stopped, so we started walking.”

The Uttar Pradesh police personnel also told Gandhi he was being detained as he was marching in an area where Section 144 has been imposed. The section relates to the assembly of not more than five people at one place.

Gandhi said even if Section 144 had been imposed, he would walk alone towards Hathras to meet the family of the rape victim.

According to Ranvijay Singh, Additional DCP, Gautam Budh Nagar, Rahul Gandhi has been taken into custody and he won’t be allowed to go further as the police have a letter from DM Hathras saying that if Gandhi goes there, it may disturb the law and order situation in the district.

The convoy was stopped near Pari Chowk, prompting party workers and senior leaders to proceed on foot, with some functionaries saying they will walk down to Hathras.

“Around the same time last year, we were fighting for the Unnao daughter and the situation in UP has not changed in a year,” Priyanka Gandhi told reporters as she started walking on the expressway.

Vadra, in a tweet, said the family had been detained and was not being allowed to talk to anyone. Posting a video of the victim’s father, Vadra said the family was being forced to fall in line.

“Will the Uttar Pradesh government intimidate people into silence? The video conference call the father had with Chief Minister Yogi Adityanath was a farce and meant to simply exert pressure on the family. The victim’s family is not satisfied with the investigations. Injustice is all pervasive,” Vadra said.

Priyanka said her party would continue to fight till women’s safety is ensured in Uttar Pradesh and unless the government was shaken and woken up, it would not do anything on this front.

Talking to reporters while walking on the Yamuna Expressway towards Hathras, she said Uttar Pradesh Chief Minister Yogi Adityanath would have to take the responsibility for the alleged gangrape of a 19-year-old Dalit woman in the district and strict action should be taken against the perpetrators of the crime.

The victim died in a Delhi hospital on Tuesday.

“The Uttar Pradesh government, Chief Minister Yogi Adityanath must take responsibility for women safety in the state and ensure atrocities against them are stopped,” she added.

“Since our cars have been stopped, we will walk down to Hathras as we want to meet the victim’s family. We want to express our condolences to the family,” Priyanka Gandhi said.

“He (Adityanath) would have to do something for women’s safety. We will continue to fight till the time he does something. The women in the entire state will fight as they realise that they are not safe and secure. Everyday such incidents are happening. As many as 11 rape cases are registered in Uttar Pradesh every day,” she said.

“Such cases are rising and the government is not doing anything. Unless we shake the government or wake them up, they will not do anything for women’s safety,” she added.

The Congress general secretary recalled that around the same time last year, her party was protesting for the Unnao rape victim.

Taking on the Bharatiya Janata Party (BJP) government in Uttar Pradesh for “not allowing the family to cremate the victim’s body with honour”, she said: “You claim to be the protectors of the Hindu religion, we are Hindus but where has it been written that you cannot allow a father to lit the pyre of his daughter and not allow the family to cremate the victim? The incident was a big injustice. What the state government did after that was a bigger injustice.”

When asked about the prohibitory orders placed in Hathras ahead of the Congress leaders’ visit, Surjewala told reporters at the DND: “Instead of stopping criminals, the Yogi Adityanath government is working on stopping Rahul and Priyanka and that is the question.” He also questioned the cremation of the woman in the dead of the night, saying it was against the Hindu traditions and was done without her family’s involvement.

Meanwhile, the state police have been deployed along the borders.