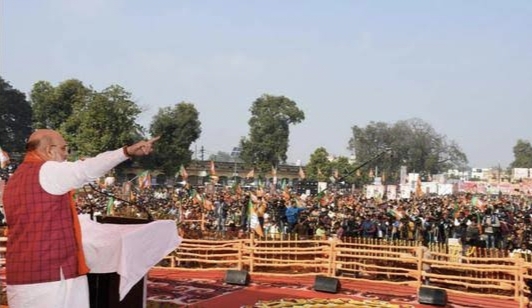 Ram temple in Ayodhya will be ready by Jan 1, 2024: Home Minister Amit Shah

New Delhi: Union Home Minister Amit Shah on Thursday said that the Ram temple will be inaugurated on January 1, 2024.

Interestingly, Lok Sabha elections is to be held in the country in 2024. Therefore, the date of the inauguration of the Ram temple is also being linked to the vote politics of the BJP.

Modi laid the foundation stone of the Ram Temple in Ayodhya on August 5, 2020. In 2019, the apex court had cleared the way for the construction of a Ram temple in Ayodhya, resolving the decades-old issue.

With the foundation stone laid for the construction of the temple, the BJP’s movement for the Ram temple came to fruition, which brought the saffron party to the pinnacle of power. Uttar Pradesh Chief Minister Yogi Adityanath and RSS chief Mohan Bhagwat were also present at the bhoomi pujan ceremony.