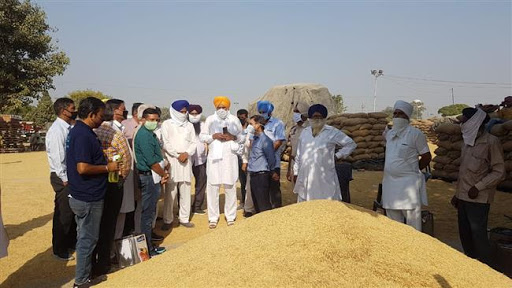 Secretary mandi board takes stock of procurement in mandis of Patiala, Fatehgarh Sahib and Mohali districts

To ensure smooth paddy procurement operations in State Mandis, Secretary, Punjab Mandi Board Ravi Bhagat, today visited various mandis in Patiala, Fatehgarh Sahib and Mohali districts and interacted with farmers and other stakeholders to enquire about their problems related to purchase, if any.

After inspecting procurement arrangements in these Mandis, Mr. Bhagat said that in wake of COVID pandemic, it was a challenging task to gear up for procurement of paddy but by taking proper precautions like setting up handwash station, earmarking of space to avoid chaos, proper sanitization of mandis, we had succeeded to start uninterrupted and safe operations of procurement at more than 4000 locations in Punjab.

He said that so far state mandis witnessed an arrival of 15.50 lakh MT paddy and all the produce has been purchased. During today’s interaction with the farmers and arhtiyas, all have expressed satisfaction on procurement process, revealed the Secretary adding that in order to avoid chaos in Mandis, pass system was introduced during previous season which is proving successful and so far a total of five lakh passes have been issued.

Mr. Bhagat during his visit to Patiala Mandi, also got checked moisture content randomly. He appealed to the farmers to bring produce with in specifications of moisture content laid by Government of India.

Exhorting farmers to not to set on fire the paddy straw and crop residual, Mr. Bhagat said that instead of polluting environment by burning paddy straw, we should use paddy straw disposing machinery like super SMS fitted combines, Choppers etc. that were being made available by State Government to various individuals, cooperative societies and farmers’ groups on subsidy.

Reiterating commitment of Punjab Chief Minister Captain Amarinder Singh of procuring every single grain of paddy, he said that procurement operations would continue till November 30 so as to enable farmers to bring their produce in Mandis in time.

Mr. Bhagat also pointed out that if any of the stakeholders was facing any hardship related to procurement operations, they could contact their respective market committees and State Control Room setup at Mandi Board Headquarters, Mohali to get their issues and complaints addressed promptly.

He also reviewed the ongoing procurement with Officers of Patiala, Mohali and Fatehgarh Sahib besides District Mandi Officers.