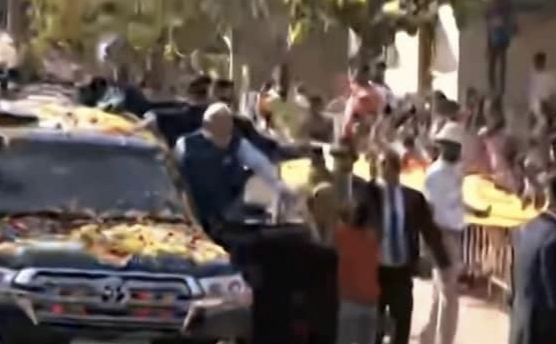 Security breach at PM Modi roadshow in Karnataka, boy runs to him with garland

New Delhi: Prime Minister Narendra Modi’s security breach has incident come to light during a roadshow in Karnataka on Thursday. During a roadshow in Hubballi, an 11-year-old boy came close to the PM, who was removed by the SPG with great vigilance.

In the video of the incident, it was seen that during the roadshow, a child comes out of the crowd and moves towards PM Modi with a garland of flowers in his hand.

However, he is not successful in reaching the PM. The SPG guarding PM Modi stopped him then other police personnel drag him to the side. However, in the meantime, PM Modi instructs him to take a garland of flowers. In such a situation, the guards take a flower garland from the person and hand it over to PM Modi. According to the child, he jumped excitedly. Investigation is being done keeping in mind the protocol.

Prime Minister Narendra Modi is in Hubballi, Karnataka to inaugurate the 29th National Youth Festival. Here they are doing a road show. Around 30,000 youth are expected to attend the inauguration of the youth festival. PM Modi will address the youth who came to the program.

The inauguration ceremony of Swami Vivekananda’s birth anniversary is being held at the Railway Sports Ground. The five-day festival is being organised by the Ministry of Youth Affairs and Sports in collaboration with the state government.