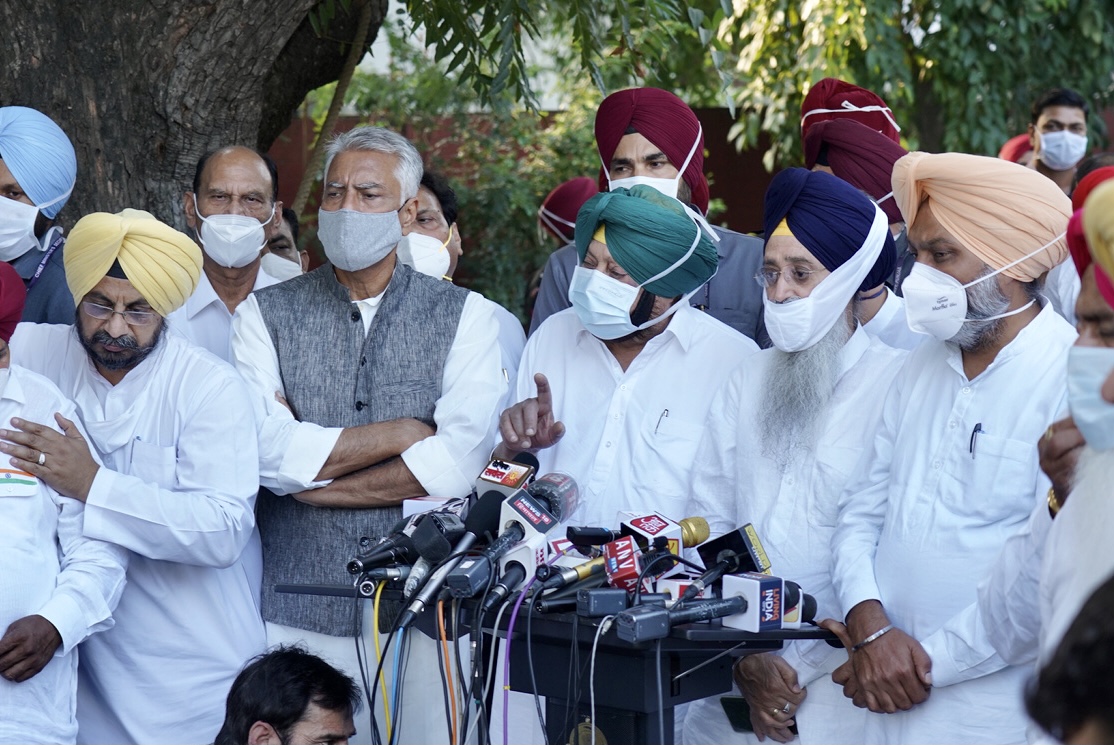 Taking on the Shiromani Akali Dal (SAD) over yet another U-turn on the farm laws, Punjab Chief Minister Captain Amarinder Singh on Friday lashed out at Sukhbir Singh Badal for repeatedly compromising the interests of the farmers with his brazen lies and petty political games, which were clearly aimed at promoting the Centre’s anti-farmer agenda.

In rejecting the state’s amendment Bills, which his party had backed in the Vidhan Sabha, Sukhbir had not just exposed his lack of moral scruples but had also echoed the recent statements of various Bharatiya Janata Party (BJP) leaders, said the Chief Minister. This showed a clear collusion between SAD and BJP, suggesting that the entire drama of Harsimrat’s resignation from the Union Cabinet and the withdrawal of the Akalis from NDA was nothing but a total farce aimed at befooling the farmers and sabotaging their fight against the central laws, he added.

“First you actively and wholeheartedly supported the Centre’s malicious Farm Ordinances, then quit the NDA calling their Bills anti-farmer, then indulged in a whole lot of political drama through protest rallies and yatras across the state in purported support of the farmers, then openly voted for the state government’s amendment Bills, and are now rejecting the same,” the Chief Minister pointed out, citing the entire sequence of Akali actions over the past few months.

The spate of SAD about-turns on such a vital issue critical to Punjab and its farmers showed that they had absolutely no compulsions in signing a deal even with the devil if it could help protect their political interests, he said.

“After all this, do you really expect the farmers to believe in the sincerity of your trumped up claims of caring about the farmers’ interests,” Captain Amarinder asked Sukhbir, daring him to give one reason why the people of Punjab, especially the farmers, should trust SAD. The Akalis had made farmers a pawn on their political chess board, he said, expressing shock at the pathetic levels to which the Badals had fallen in their desperate bid to protect their vested interests.

The Chief Minister trashed Sukhbir’s argument that the Akalis did not get the time to study the state government’s Bills, quipping that this was not possible considering the massive legal and other infrastructure at the disposal of SAD. He took a jibe at Sukhbir’s claim that his party MLAs voted for the Bills without properly going through them, saying “this might explain why the Akalis have been stamping their approval on all kinds of anti-people, anti-India and anti-Punjab legislations of the Union Government over the past 6 years.”

Slamming the SAD chief over his blatantly shameless lie with regard to the resolution passed in the Assembly, Captain Amarinder pointed out that nowhere was it mentioned that the Punjab Government was committed to declaring the entire state as Principal Market Area, as claimed by Sukhbir. “Are you trying to say that your MLAs had trouble reading and understanding the 370-word Resolution, of which around 100 words were just names of Ordinances/Acts?” said the Chief Minister, terming Sukhbir’s argument as ludicrous.

In any case, he said, what was important was not declaring the state as Principal Market Area but to protect the MSP and ensure that the state retained control with no punitive action, which were the main concerns of the farmers. The state government had, after taking legal and expert opinion, chosen the best method to do so, but the Akalis seemed stuck on a particular methodology, irrespective of whether it would work or not, he added. Also, even if the entire state was sought to be converted into a principal market area, such approach would not have been free from the requirement of Presidential consent, which, in the backdrop of the central farm laws already in force, was the most expeditious way of implementing the will of the State of Punjab, he added.

Captain Amarinder also lashed out at Sukhbir for persistently misleading the farmers by lying about the Constitutional and legal position of the state. The Constitution gives the state clear and unequivocal right under Article 254 (II) to seek amendments to central laws, he pointed out, adding that the legislations of the Government of India also fail to stand scrutiny on grounds of being anti-federal.