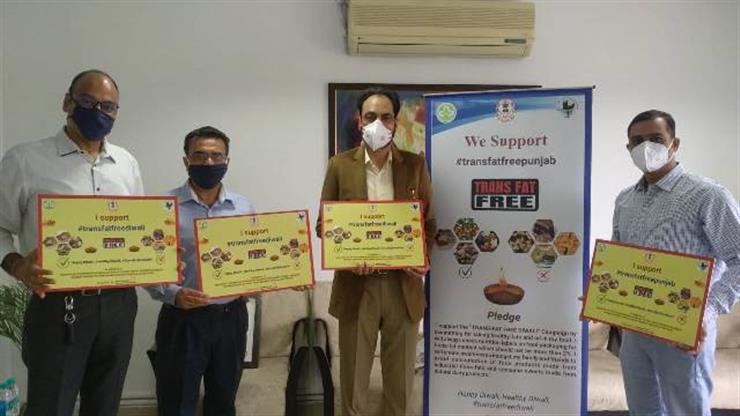 Principal Secretary Health, Mr. Hussan Lal and Commissioner, Food and Drug Administration, Mr. Kumar Rahul, here today launched a “Trans-fat free Diwali campaign” ahead of the festival season. Conceptualized and initiated by the Department of Community Medicine and School of Public Health, PGIMER, Chandigarh; the campaign aims to create awareness among the policy makers, producers, suppliers, and general public about the negative health impact of trans-fats. The large-scale awareness campaign is being supported by Strategic Institute for Public Health and Education Research (SIPHER) and Global Health Advocacy Incubator (GHAI).

Lauding the campaign Mr. Hussan Lal appreciated the efforts of PGIMER, SIPHER, and GHAI for launching “Trans-fat free Diwali” campaign that would encourage Punjab to become a healthier state. As our state is having high prevalence of high blood pressure, high cholesterol, and high blood sugar, efforts should be made to reduce the use of Trans fatty acids by creating awareness about its ill-effect on the health of the people.

Supporting the Trans fat free Diwali Campaign, Mr. Kumar Rahul urged all to have a healthy and safer Diwali by shunning trans-fats rich food. He added that Diwali being the key festival of India, it not only brings cheer and excitement among the people but also enhances the intake of trans-fats in the form of sweets, frozen desserts and fried food and thus increases risk of hypertension and cardiovascular diseases.

Dr Sonu Goel, Professor, Department of Community Medicine and School of Public Health, PGI, Chandigarh elaborated that in India, between 60,000–75,000 deaths annually are attributed to trans-fat consumption. Punjab, with a high prevalence of heart disease and obesity, is at a greater risk due to high levels of Trans fatty Acids (TFA) consumption. Keeping the alarming figures in mind, we had multiple consultations with bureaucrats and technocrats to chalk out a plan to generate awareness about the impact of TFAs on our health. With this campaign, we will also be promoting the replacement of industrially-produced trans fats with healthier cooking media. He added that, PGI Chandigarh & Health Department, Punjab have approached different schools and colleges for slogan writing and taking pledge against the consumption of trans fats to create awareness on ill-effects of trans-fats among the youngsters and general public. The campaign will also run on the social media handles of PGI with the #TransfatfreeDiwali,; #TransfatfreePunjab and #HappyDiwaliHealthyDiwali. Different challenges and competitions will be posted daily on the social media to effectively interact with the audiences across the globe.

Millions of people are bound to die or suffer from heart diseases if industrially produced trans fats are not eliminated from foods globally. SIPHER and GHAI are privileged to provide technical support to PGI Chandigarh for generating awareness on this key issue,” said Dr Rakesh Gupta, President, SIPHER.