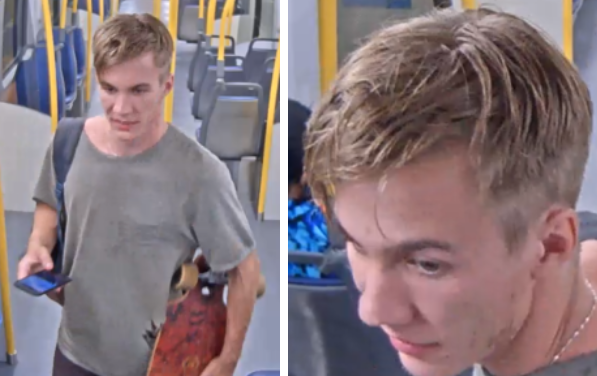 New Westminster – Metro Vancouver Transit Police are asking for the public’s assistance in identifying a man who allegedly exposed his genitals to a female SkyTrain passenger.

A video review revealed the suspect initially boarded the SkyTrain at Coquitlam Central Station at approximately 8:50pm. Before and after the alleged incident, he rode trains for an extensive period of time along the Millennium Line and the Expo Line west of Commercial-Broadway, getting on and off trains and approaching multiple women, revealing a predatory nature to his actions. The man finally left the transit system at Stadium SkyTrain Station at approximately 11:20 pm.

The suspect is described as a Caucasian male in his twenties, dark blonde/light brown hair, light stubble, slender build. He was wearing a light brown t-shirt, shorts, and carrying a blue backpack and a longboard.

Transit Police are very concerned by the actions of this suspect. Additionally, Transit Police believe he may have subjected other people to these actions who have not yet spoken to police. Anyone with information regarding the identity of this suspect or who witnessed this incident is asked to contact the Metro Vancouver Transit Police tip line at 604.516.7419 or text us at 87.77.77 and refer to file # 2021-15475.