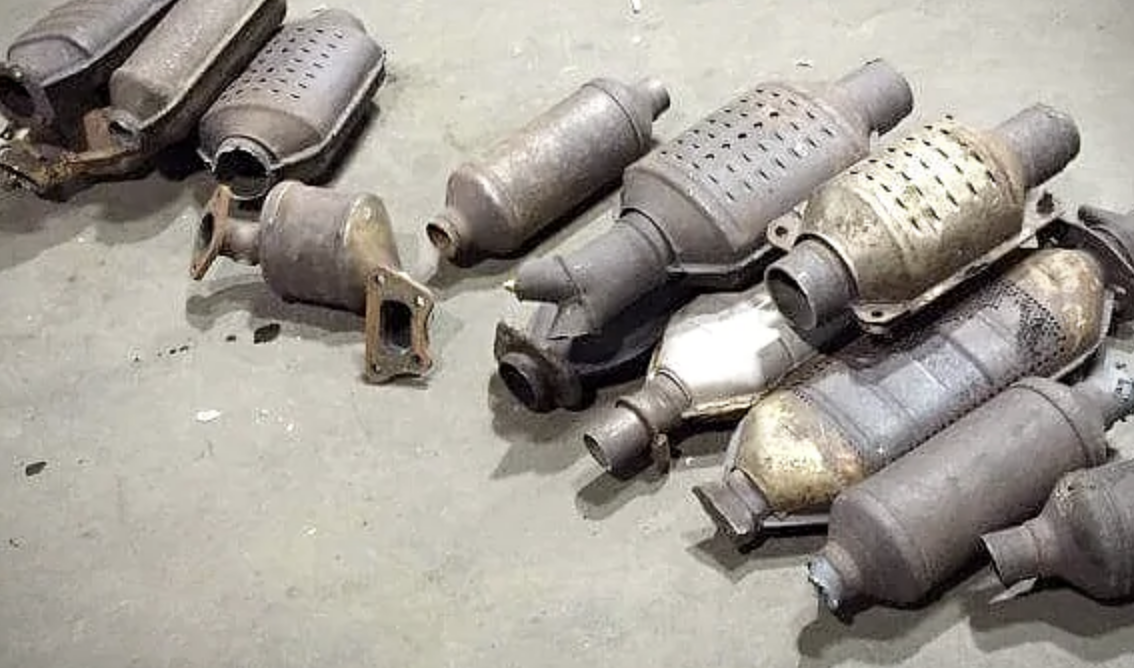 Just after midnight on Sunday, October 4, 2021, a resident of North Van’s upper Lonsdale neighbourhood called 9-1-1 after spotting two thieves allegedly removing the catalytic converter from his neighbour’s Honda CRV. “As officers headed to the scene, they spotted a vehicle leaving the area that matched the description provided by the witness,” said Sgt. Peter DeVries of the North Vancouver RCMP. “They activated their emergency equipment and indicated for the vehicle to stop, but it did not, instead fleeing Eastbound on Hwy. 1.”

Out of concern for public safety, officers did not initiate a vehicle pursuit, said DeVries, but other North Van officers quickly coordinated a plan to intercept the vehicle, and safely prevent them from evading police. “Officers positioned themselves some distance down the highway, and then laid down a ‘spike belt’ tire deflation device ahead of the vehicle,” he said. “The vehicle drove over the spike belt, which deflated three tires. That significantly slowed their escape. Eventually, they abandoned the vehicle on the other side of the Second Narrows bridge and fled on foot into an East Vancouver neighbourhood.”

North Vancouver officers requested assistance from Burnaby RCMP and Vancouver Police Department to search for the suspects. Additional officers flooded the area, and the unoccupied vehicle was soon located near Slocan St. in Vancouver. Shortly after, two suspects were found near Renfrew St. and E. Hastings St. by and taken into custody without incident.

Two males in their 30’s, one a resident of Surrey and the other of Port Coquitlam, are alleged to have committed a variety of offences, including Theft, Mischief, Dangerous Operation of a Motor Vehicle, and Flight From Police. One of the individuals was also arrested on an outstanding warrant from Langley.

In recent months, North Vancouver RCMP have been warning the community about catalytic converter thefts and asking residents to observe and report anything they feel is suspicious in their neighbourhoods. “The neighbour did exactly what we’ve been encouraging the community to do. They called 9-1-1 and reported what they were seeing,” said DeVries, who wishes to remind the community of the important role they play in helping prevent crime.

“When we respond, we will be swift, safe, and smart. In this case, that was the formula for success.” DeVries also highlighted the effectiveness of working collaboratively with policing partners across jurisdictions.

“We want criminals to know that if they’re planning on committing crime in North Van, we won’t be sitting back. The community will be watching, and the police will be responding.”