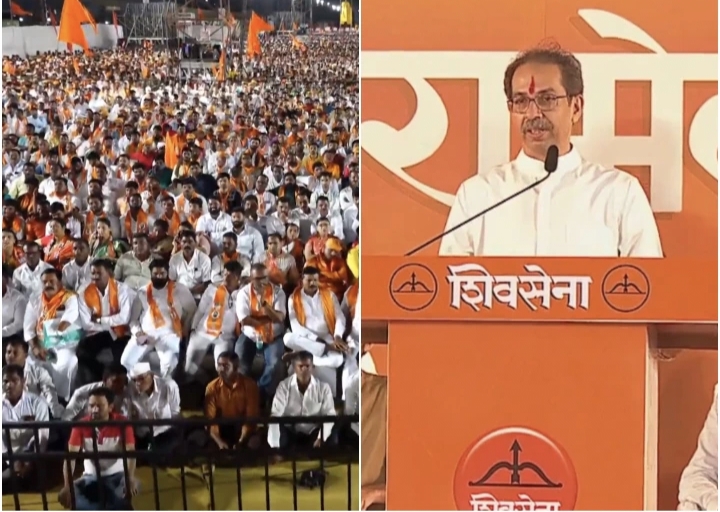 Mumbai: On the festival of Dussehra, both factions of Shiv Sena organized separate rallies. The faction led by former CM Uddhav Thackeray held a Dussehra rally at Shivaji Park, while the faction led by Maharashtra Chief Minister Eknath Shinde held a rally at The Bombay Kurla Complex (BKC).

In both rallies, a chair on the dais was kept vacant as a mark of respect to Balasaheb Thackeray.

Addressing the Dussehra rally at Shivaji Park, Uddhav Thackeray lashed out at the other side. Uddhav Thackeray took a dig at Eknath Shinde in gestures and said that Shiv Sainiks will not forgive Kattappa. He said that he had fixed a CM of two and a half years with the BJP. I am saying this by taking oath of Balasaheb Thackeray and my mother.

Uddhav Thackeray targeted CM Eknath Shinde’s camp and said that they are traitors and their identity cannot be erased. “I will call them traitors, they are traitors. The ministerial post is for a few days, but the traitor’s seal is for life.”

Maharashtra Chief Minister Eknath Shinde began his speech with the jai of Chhatrapati Shivaji Maharaj at the Dussehra rally at BKC Ground in Maharashtra. Eknath Shinde chanted Jai Bhagwani and Balasaheb Thackeray during this time. “I humbly greet the hardcore Shiv Sainiks present here inspired by the thoughts of the Shiv Sena founder. Eknath Shinde leaned away from the mike and bowed to the public present in the field.” During this, he said that proudly say that we are Hindus and attacked Thackeray for calling him traitor.