Surrey, BC – The United Truckers Association (“UTA”) will make a statement on Canada Day by taking part in a truck rally that will show opposition to the Port of Vancouver’s current truck age replacement program.

The UTA is standing against the Port of Vancouver for two key reasons:

1) The unfair targeting of container truckers accessing marine terminals, where no other class of trucker in British Columbia subject to such replacement requirements;

2) The devotion to a system using Diesel Particulate Filter (“DPF”), which is widely gaining a reputation as a fire hazard that is unsafe for drivers.

A 2019 lawsuit filed by California trucking companies against the California Air Resources Board over the unsafe nature of DPF. Exhaust fires caused by the DPF “regeneration” process have led to DPF being banned in many countries in Europe and a number of lawsuits and investigations into their role as a fire accelerant in accidents. 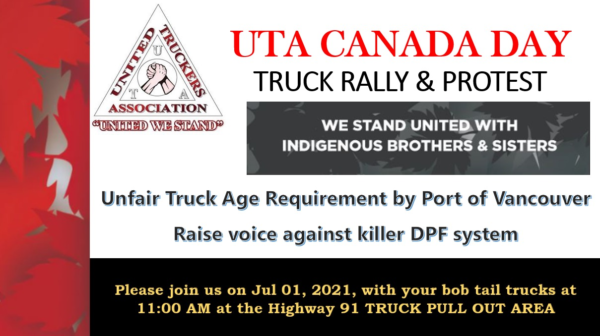 The unwillingness of the Port of Vancouver to even consider any alternatives points to a deeper agenda against owner operators, according to UTA spokesperson Gagan Singh.

“The fact that no other commercial trucks in BC are facing these type of replacement requirements demonstrates how UTA members are being targeted, as they have been since 2014,” says Singh. “Further, the systems are not proven as safe, and we suspect the cause of two deaths that the UTA has had to endure over the past few years.”

Mohinderpal Singh Sekhon was killed in Kamloops just over two weeks ago due to a uncontrollable fire that occurred following a highway accident. Rajwinder Singh Sidhu was killed in June, 2019 in an accident leading up to Deltaport, where by the time emergency services arrived, there was nothing left of the truck due to an epic blaze.

The UTA’s protest rally will not only be a message to the Port of Vancouver, but also to local federal Members of Parliament who our organization has engaged for many years.