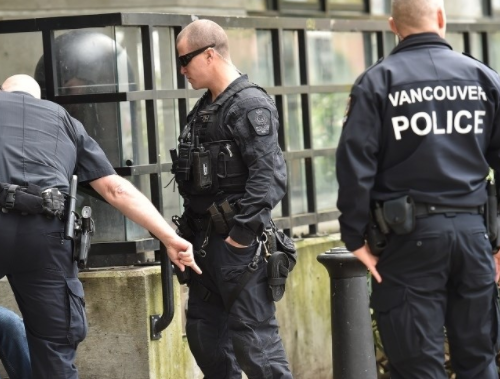 Vancouver – Nearly a dozen Vancouver Police officers are recovering after being injured or assaulted during the Labour Day weekend.

“Policing is a tough job, and every day our front-line officers put their own safety at risk,” says Sergeant Steve Addison. “Unfortunately, we continue to see officers getting hurt while trying to do their jobs and keep others out of harm’s way.”

–          A 21-year-old woman was arrested near Knight Street and East 54th Avenue on Monday after a man was stabbed and robbed of his bike. The suspect spat in the face and hair of the arresting officer, who was reading the suspect her Canadian charter rights. The officer was taken to hospital due to the risk of infectious diseases.

–          Officers responded Monday to an apartment on Dundas Street after a woman phoned police to report that her ex-boyfriend had thrown a rock through her window, threatened her, and was hiding in a bush. The suspect, who was armed with a knife, tried to run from police, then resisted arrest. As the officers struggled to control the violent suspect, the man’s brother tackled one of the officers and elbowed another in the head. The officers suffered minor injuries, and the suspects were taken to jail.

–          Two officers were patrolling on Powell Street in East Vancouver on Monday night when they spotted a man who had a B.C.-wide warrant for a violent offence. The man realized he was going to be arrested and took off running. He scaled a fence as he attempt to flee, but the officers were able to arrest him after a short chase. Three officers suffered injuries during the pursuit, including one that required hospitalization and stitches.

–          Staff at a Kitsilano grocery store called police on Sunday to report a man acting violently and causing a disturbance. When officers arrived, there was a physical confrontation, resulting in three officers getting hurt. One officer suffered cuts and scratches. Another officer had blood spat on him. A third suffered an injured ankle and is now off work.

“Every police officer understands the dangers and risks associated with their work,” adds Sergeant Addison. “However, we’re concerned by the number of people who now seem emboldened and feel entitled to assault officers and put their lives at risk.”