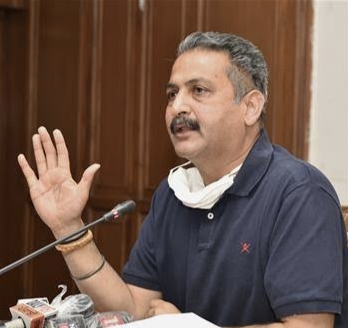 Chandigarh: Former minister Vijay Inder Singla is now under the lens of the Aam Aadmi Party (AAP) government of Punjab into a tender allotment of worth 5 crores allotted when Singla was PWD Minister in Congress government.

According to sources, Vigilance has called 5 people close to Singla for questioning in this regard. Vigilance suspects that there has been some irregularity in these tendering. However, there is no response from the Vigilance Bureau or former minister Vijay Inder Singla in this regard.

According to sources, a complaint was received by the Vigilance regarding this in which it was said that there are irregularities in the tender of more than 5 crores in the previous Congress government.

The preliminary investigation of vigilance is suspecting wrongdoing as work contracts were reportedly allotted to specific people bypassing rules.

After which the DSP level officers of Sangrur have been entrusted with the investigation of the matter. In this case, the Vigilance has now summoned some officers to probe the case, officials said.

2 former Congress ministers in jail, one on bail

In Punjab, two former Congress ministers Sadhu Singh Dharamsot and Bharat Bhushan Ashu are in jail in corruption cases. While Sangat Singh Giljian is out on bail. Apart from this, a complaint has also been filed against former Finance Minister Manpreet Badal.

At the same time, former CM Captain Amarinder is also under the lens of the government in the agricultural machinery scam of about 150 crores. Amarinder Raja Warring facing allegations of irregularities in purchase of government buses while former CM Charanjit Channi in illegal mining cases.