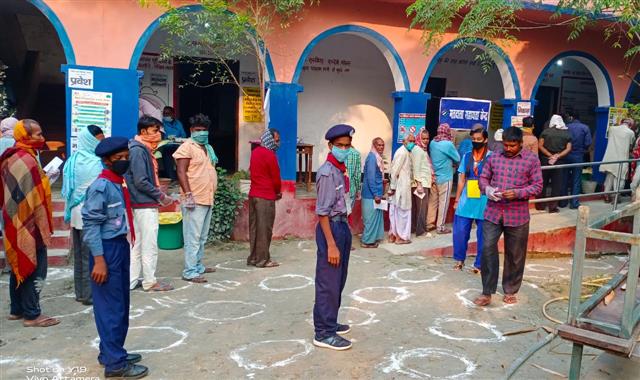 Polling is underway in 78 assembly segments of Bihar in the third and final phase of state elections on Saturday in which 2.35 crore voters are eligible to decide the fate of 1,204 candidates.

Casting of votes began at 7 am at all 33,782 polling stations, where as many EVM sets and VVPAT machines have been installed and paramilitary forces deployed to maintain order, officials said.

An estimated 7.70 per cent of the total 2.35 crore electors exercised their franchise till 9 am.

According to the Election Commission, the polling percentage at 9 am was 7.69.

The maximum 10.67 per cent turnout till 9 am was recorded in the Araria district and the minimum (5.36 per cent) in the Katihar district.

Voting is simultaneously taking place for the Valmiki Nagar Lok Sabha seat in West Champaran district where a by-election has been necessitated by the death of the sitting JD(U) MP Baidyanath Mahto.

Of the total 2.35 voters in the 78 assembly segments, spread across 15 districts of north Bihar, 1.23 are men, 1.12 crore are women while 894 are in the “third gender” category, according to statistics provided by the Election Commission.

In addition, re-poll is being held at two polling stations of Hisua assembly segment in Nalanda district where votes were cast in the second phase on November 3, the Election commission said.

It said the re-poll had been necessitated by the EVMS getting damaged in a road accident.

Among the candidates in the fray, 37 belong to Chief Minister Nitish Kumar’s JD(U), 35 to the BJP, while five are contesting on tickets of junior NDA ally Vikassheel Insaan Party and one from the Hindustani Awam Morcha.

The candidates of the JD(U)-BJP include the assembly Speaker and 12 members of the state cabinet.

A notable Congress candidate in this phase is Subhashini Yadav (30), veteran socialist leader Sharad Yadav’s daughter who is making her debut from Bihariganj which falls under Madhepura Lok Sabha seat, represented by her father a number of times.

Chirag Paswan’s Lok Janshakti Party is in the fray on 42 seats, including Govindganj, which it holds and where it is pitted against the BJP, which it claims to be supporting while being opposed to the JD(U).

The final phase of elections is also noteworthy because of the role the “Owaisi factor” might play.

Headed by fiery Hyderabad MP Asaduddin Owaisi, the AIMIM had registered a stunning victory in Kishanganj last year, defeating the Congress candidate whose son’s election to Lok Sabha had necessitated the by-poll.

The AIMIM is in the fray in more than a dozen seats, mostly in the Kosi-Seemanchal region which is densely populated and has a high percentage of Muslim residents.

The NDA hopes that the party’s ability to cut into Muslim votes will weaken the RJD and help the JD(U)-BJP combine.

Voting for the first phase was held on October 28 and for the second phase on November 3. Results will be out on November 10.