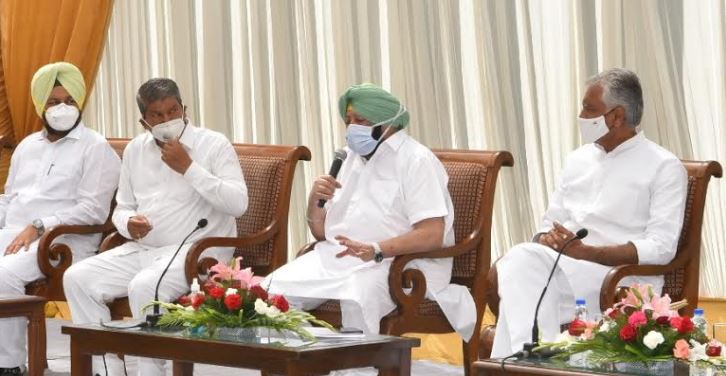 Will fight against farm laws on all fronts: Punjab CM to farmer unions

Extending his government’s full support to the agitating farmers in these ‘dark and difficult times’, Punjab Chief Minister, Captain Amarinder Singh, on Tuesday assured of all possible legal and other steps to fight the draconian new farm laws, including a special session of the Vidhan Sabha to discuss and decide the way forward.

Chairing a meeting with representatives of 31 farmer unions to take their views on the matter, the Chief Minister said he would be discussing the issue with his legal team later today to finalise the next steps, including challenging the farm laws in the Supreme Court. Besides farmer representatives, AICC general secretary in-charge of Punjab, Harish Rawat attended the meeting, along with Cabinet Ministers Sukhjinder Singh Randhawa, Gurpreet Singh Kangar and Bharat Bhushan Ashu, MLA Rana Gurjit Singh, PPCC president Sunil Jakhar and Advocate General Atul Nanda.

“We will take all possible steps to counter the Union Government’s assault on the State’s federal and Constitutional rights, and fight for the interests of the farmers,” Captain Amarinder assured the farmer representatives. If the legal experts advise amendment to the state laws to fight the central laws, a special session of the Vidhan Sabha will be immediately called to do so, he said.

He made it clear that the government had no qualms about convening an Assembly session if that was the best course in the circumstances. However, he trashed SAD president Sukhbir Badal’s demand for a special Vidhan Sabha session as cheap gimmickry after their active support to the central laws for months. He demanded to know where were the Akalis in the last session and why Sukhbir did not support the other parties at the all-party meeting.

Captain Amarinder slammed the Akalis for pawning off farmers’ interests to large corporates to promote their petty political interests, pointing out that SAD MLAs had chosen to stay away from the Vidhan Sabha session during which the resolution against the Farm Bills was passed. It was clear, he said, that the Akalis, led by Sukhbir Badal, had been wholeheartedly supporting the Farm Ordinances throughout, and only backed out once their position in Punjab became untenable amid widespread angst among the farmers. If they were so concerned about the farmers’ interests, why did Harsimrat Badal not resign from the Union Cabinet the moment the Farm Ordinances were brought in by the Centre, he asked.

Asserting that the Centre had no right to enact these laws as it amounted to violation of the Constitution and attack on the federal structure, the Chief Minister said his government shared the concerns of the farmers and will do whatever it takes to scuttle the Union Government’s attempt to ruin the farming community with these draconian legislations.

The battle will be fought on all fronts, the Chief Minister said, adding that besides the Congress signature campaign, announced yesterday by AICC general secretary Harish Rawat, all Panchayats in the state would be requested to pass resolutions against the Agriculture Acts, and the same would be sent to the Union Government.

Declaring that his government and the Punjab Congress was with the farmers in this ‘aukhi ghari’ (difficult time), Captain Amarinder said he would take the suggestions of the Kisan Unions to legal experts to finalise the next course of action.

If the new laws are implemented, it will spell the end of Agriculture, said the Chief Minister, warning that “in the times ahead, the Government of India will follow up these legislation with elimination of MSP and FCI, bringing an end to the time-tested farming procurement and marketing system as we know it.” The Mandis that have existed and worked well for more than 60 years will be wiped out, and with MSP also ending, wheat will be sold the same way as maize currently is – at much lower prices than dictated by the MSP, he added.

The farmers not just in Punjab but across the country will be ruined, the Chief Minister said, underlining the need to fight these draconian laws tooth and nail to saving Agriculture. He said he had written to the Prime Minister thrice before the Bills were passed, urging him to not go ahead with the move as it would create immense problems for the whole nation, but he did not get any response. Even his request for bonus on paddy to check stubble burning, especially in these Covid times. had gone unheard, he said. The Government of India could not trusted to protect the farmers’ interests on its own, he said, pointing out that the state had not received their rightful GST compensation from the Centre for 8 months.

Promising to fight the Farm Laws shoulder to shoulder with the farmers, Jakhar said he was ready to quit PPCC presidentship to join their protests without making it a political act. However, he was confident that the Chief Minister would find way to counter the Central assault on the farming community and protect their interests just as he had done on the water issue. “They (Centre) have killed the farmers with a pen, we will have to find a way to kill them with a pen,” he said, quipping “Kalam naal marya hai, assi kalam naal bachavange” (We will save the farmers with the pen.

Earlier, several farmer leaders urged the Chief Minister to challenge the central laws legally, and take whatever other steps needed to protect the farmers, including blocking construction of Adani’s silos in the state. They all reposed their faith in Captain Amarinder to save the farmers from this catastrophe.

Balbir Singh Rajewal of BKU Rajewal said the new laws will ruin the farmers, the Arhtiyas, the farm labour, the Mandi employees and rendered lakhs of people jobless, leading to a devastating impact on the state’s economy. These laws will lead to the establishment of two kinds of Mandis, one with tax and other without tax for private players, which will eventually destroy the Government Mandis and lead to corporate monopolisation and farmer exploitation. He was in favour of passing state laws through a special session of the Vidhan Sabha to protect the farmers and Punjab.

Jagjit Singh Dallewal of BKU Sidhupur also urged the Chief Minister to convene a special session to pass a law to counter the central legislations, while Dr. Darshanpal, President Krantikari Kisan Union Punjab, requested him to consult constitutional experts so that the state could formulate new laws, in line with Congress President Sonia Gandhi’s directives.

Buta Singh and Jhanda Singh of BKU Ekta said it was a fight to the finish to protect the farmers and the state from annihilation by the central government, whose sole aim was to help private corporates. If Agriculture is destroyed, so will the nation, they warned.