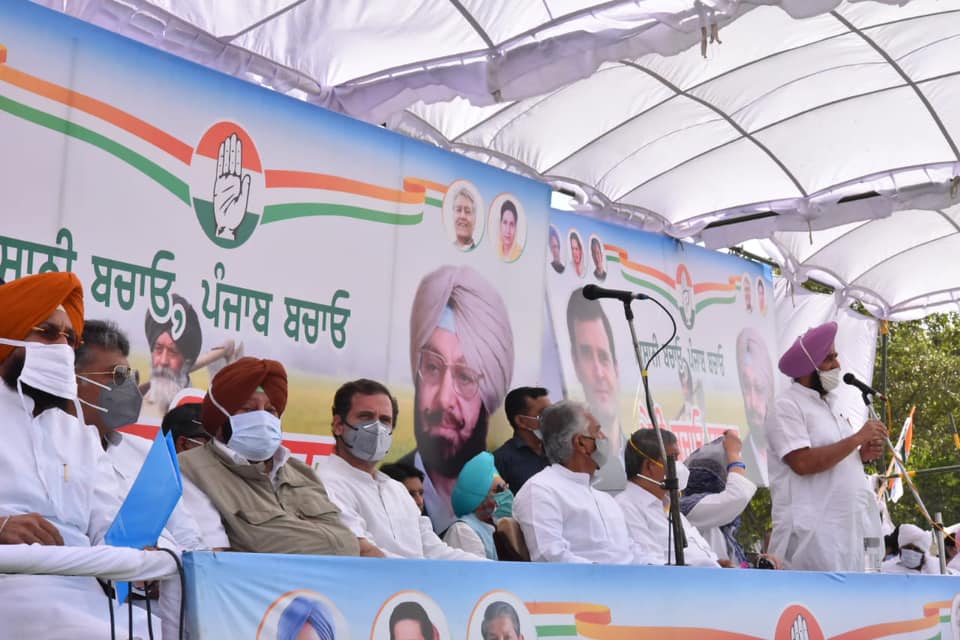 Francewala (Patiala), October 6:
The 3-day Punjab `Kheti Bachao Yatra’ of Congress MP Rahul Gandhi and Chief Minister Captain Amarinder Singh culminated on Tuesday at the border along Haryana, with a vow by the two leaders to not budge even an inch from their principled stand in support of the favours, who were under attack by the Centre’s draconian Farm Laws.
At a public rally at village Francewala near Sanaur in Patiala District – the final point of the tractor rally of the Congress leaders, including AICC general secretary Harish Rawat and PPCC president Sunil Jakhar, Rahul lashed out at the BJP-led government at the Centre for inflicting atrocities upon atrocities on the people of all sections in the past six years. The poor have become poorer and the rich are getting richer, he said, slamming Prime Minister Narendra Modi of serving the interests of corporate houses at the cost of those of small businessmen, farmers, arhtiyas and farm labour.
“But the farmers would die rather than bow their heads before these unjust and barbaric laws,” said Rahul, adding that the mandi and procurement system, which the Farm Laws would destroy, was the protective shield for the farming community. These laws would make farmers bonded labourers in the hands of Ambani and Adani, said Rahul, calling upon the farmers to act so that they don’t have to repent later.
This is not a fight only for Punjab but for the entire country, said Rahul, warning that once these laws are implemented, farmers would not be able to knock at the doors of Administration for help. “Do you need such a system where shopping malls are constructed while farmers die of starvation?” he asked, adding that he will now allow this to happen.
Chief Minister Captain Amarinder Singh, in his address, said that the regions of Dakala and Sanaur have always stood by his family and the Congress Party, and the people of these areas were now standing rock solid behind the party on the issue of the black farm laws.
Castigating the BJP Government, the Chief Minister said that farmers all over the country have risen up against the Modi regime and warned that “these oppressors will be decimated in the next elections.” The Union government, he said, was hell bent on finishing those very farmers and farm labourers who had given food to the nation all these years, including during the Covid crisis, and was also trying to do away with PDS, FCI, Mandis and arhtiyas, he added.
“If the farmers are really happy with these laws, as the Modi Government claims, then why are they out on the streets protesting?”, asked Captain Amarinder, asserting that till these laws are rolled back, Punjab’s war against them will continue. This is a fight for ‘Roti’ as 65 percent of the country’s population thrives on agriculture, he said, extending his full support to the farmers.
AICC General Secretary and incharge Punjab Affairs Harish Rawat thanked Rahul Gandhi for coming to Punjab in support of the farmers in their hour of crisis. Equating Modi with the British, he said that just as the atrocities of the British empire failed to dampen the spirit of the Gandhi family, Modi also would not be able to do so. Calling Rahul Gandhi the future of the country, Rawat said that only he can give a befitting response to the Modi Government.
Pledging to stand with the farmers, Patiala MP Preneet Kaur said the Chief Minister has not left any stone unturned in fighting for the rights of the farmers. She further said that Rahul Gandhi had always stood for championing the cause of all the sections of the society.
PPCC President Sunil Jakhar said the day the destinies of the farmers went into the hands of corporate giants, the PDS system and the mandi system would be finished, with devastating effect on the farming community and the poor. The farm laws would turn farmers into daily wagers, said Jakhar, lashing out at the Akalis, whom he branded agents of Modi.
Prominent among others who were present on the occasion were Cabinet Minister Brahm Mohindra and Sukhbinder Singh Sarkaria,Punjab Mandi Board Chairman Lal Singh, MPs Manish Tiwari, Jasbir Singh Dimpa, Chaudhary Santokh Singh, Gurjit Singh Aujala, Dr Amar Singh, Mohd Sadeeq and MP Partap Singh Bajwa, along with Sanur Halqa Incharge Harinder Singh Harry Mann, MLAs Kuljit Sing Nagra, Rana Gurjit Singh, Madan Lal Jalalpur, Hardyal Singh Kamboj, Rajinder Singh, Dr Raj Kumar Verka, Gurkirat Singh Kotli, Navtej Singh Cheema, Gurpreet Singh GP, Lakhvir Singh Lakha and Sukhpal Singh Bhullar, PPCC Secretary Captain Sandeep Sandhu, Punjab Youth Congress General Secretary Mohit Mohindra and Punjab State Social Welfare Board Chairperson Gursharan Kaur Randhawa.