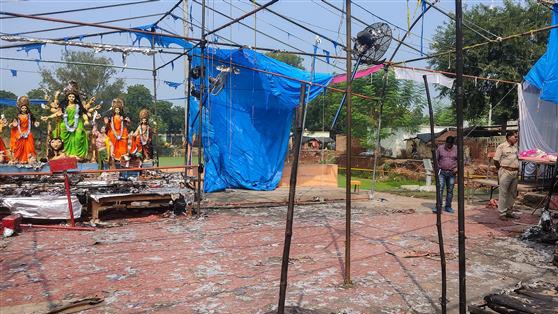 Bhadohi: At least five people were killed including three children and 64 others injured in a fire that broke out at a durga puja ‘pandal’ in Uttar Pradesh’s Bhadohi on Sunday night due to overheated halogen lights during a digital show, police said.

Around 300-400 people were present in the pandal during the digital show when the fire broke out on Sunday night, officials said today.

The fire incident took place around 9.30 pm on Sunday at Nathua village under Aurai police station limits, District Magistrate Gurang Rathi said. A total of 67 people were injured in the incident.

According to the information, all the injured have been identified and the district administration and police have a list of them. The official said most of the women and children were in the pandal.

Officials said that the reason for the fire by the investigation team is the overheating of the halogen light. Nine of the injured were referred to a local hospital, while 33 others with severe burn injuries were referred to a hospital in Varanasi, the district magistrate said on Sunday.

SP Anil Kumar said an FIR has been registered at Aurai police station in this regard. Uttar Pradesh Chief Minister Yogi Adityanath expressed grief over the incident and expressed condolences to the families of the deceased.