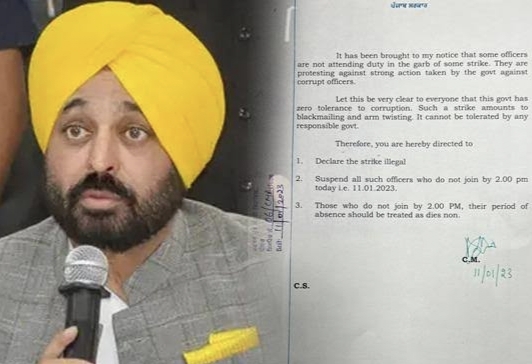 Chandigarh: The strike by PCS officers of Punjab, which started after the arrest of Ludhiana Regional Transport Authority (RTA), has been called off after 2 pm. All officers will join duty soon.

Significantly, CM Mann had issued a warning to all the officers and gave an ultimatum to join duty by 2 pm, failing to which face suspension. Venu Prasad made it clear that the government is strict against corrupt officials.

“We were not on strike, just on mass leave,” said Rahat Oberoi, president of the PCSA association. Some old demands had been stuck for quite some time. They were placed before the Chief Minister and his Principal Secretary. After getting assurance from the government that their problems will be resolved, all are joining duty from now on.”

CM Bhagwant Mann has issued an order this morning. He said that it has come to his notice that some officers are not joining duty and are on strike. They were upset with the strict action taken against the government official in the charge of corruption. The government is adopting a ‘zero tolerance’ policy in terms of corruption.

CM Mann has termed this strike illegal in his order. He has clearly written in the order that any officer who does not join his duty by 2 pm today will be suspended. The absence of those who do not join duty by 2 pm will be considered irresponsible.

Punjab Chief Secretary Vijay Janjua has also filed a petition against Chief Minister Bhagwant Mann. He has made it clear that if the officers who went on strike by 2 pm do not return, then this period will be considered as break of service.