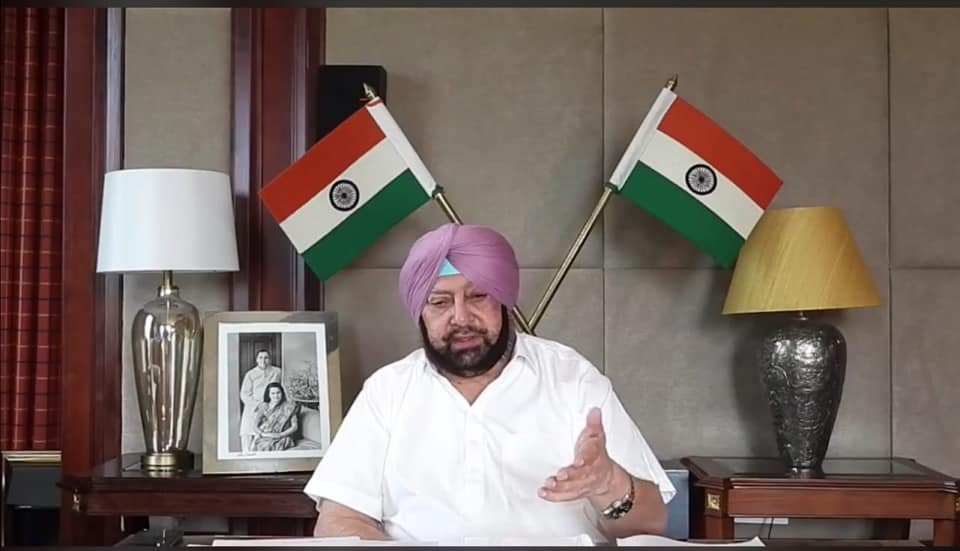 Chandigarh, September 16: Warning that the enactment of the farm ordinances would lead to resentment and unrest in the border state, which was already at the receiving end of Pakistan’s concerted efforts to foment trouble, Punjab Chief Minister Captain Amarinder Singh on Wednesday led a Congress delegation to submit a memorandum to Governor VP Singh Badnore, seeking his intervention for non-pursuance of the Agriculture Bills by the Centre in Parliament.

Flanked by PPCC chief Sunil Jakhar and other members of the delegation, the Chief Minister told the Governor that the party felt that any move to tinker with the present procurement system, and that too in the times of nation-wide crisis, may deepen social unrest amongst the farmers of the State. “It may not be conducive for the peace and development of the region, which faces serious challenges of public order due to a live international border,” he stressed.

Pointing to Pakistan’s bid to disturb the state’s peace and stability through narco-terror and other anti-India acts, the Chief Minister later told mediapersons outside the Governor House that these anti-farmer legislations would lead to rise in the people’s anger. “Why are we playing into the hands of Pakistan?,” he asked.

These Bills, one of which has already been passed in the Lok Sabha yesterday, are against national interest, and particularly detrimental to Punjab, where the majority of the farmers tilled less than 5 acres of land and would be the worst hit, warned Captain Amarinder. Hoping that the Centre will back out of pursuing the remaining two Bills and not get them passed in Parliament, he said the Centre had failed to take the interest of the farmers into account in introducing these Ordinances and instead, took a stand in favour of corporate houses.

The Chief Minister said he had written to the Prime Minister thrice on the issue but had not received any response to far. The enactment of the remaining two Bills would ruin Punjab, he said. If MSP ends, which is what the Centre seems to be moving towards, the agriculture sector will be ruined in Punjab and across the country, he added.

Taking on the Akalis and Sukhbir Badal over their theatrics and U-turns on the issue, the Chief Minister pointed out that all except the Shiromani Akali Dal (SAD), and the Bharatiya Janata Party (BJP) were on board at the all-party meeting he had convened on the issue. “We passed a resolution in the State Assembly, we talked to all political parties and farmer unions…and all were on board except the Akalis, who are now pretending to be opposed to the Ordinances,” he said.

“Isn’t Harsimrat Badal a member of the cabinet? Why didn’t she protest there and why doesn’t she speak outside either on the issue? What did the Akali Dal do in the assembly?” asked the Chief Minister, terming their U-turn a total farce and nothing more than a face-saver.

The Congress, and his government, had been vocally and vehemently opposing the Ordinances all through, Captain Amarinder pointed out, adding that the Union Minister in charge of Consumer Affairs, Food and Public Distribution had made a misleading and incorrect statement in Parliament claiming that Punjab was on board the move.

The Chief Minister said that Punjab was in fact excluded from the high-powered committee on agricultural reforms constituted by the Government of India and it was included after his government protested. One meeting was attended by Manpreet Badal and at the second meeting of officers the states were clearly told that their opinion was not being sought but they were only being apprised about the proposed reforms. No mention was ever made of the Ordinances, he added.

Termed the passage of one of the Bills in the Lok Sabha yesterday a black day in the history of Parliament, Jakhar warned that under pressure for the farmer unions, the Akalis may even go to the extent of enacting the drama of resigning from the Central Government but it would be another farce on the part of the party. He saluted the farmers of the country, especially Punjab, who had compelled the Akalis to change their stance on the issue. He also categorically denied Union Minister Raosaheb Patil Danve’s claim and said Punjab was never consulted on the Ordinances.

The delegation requested the Governor to “recommend to the Union Government not to pursue the Bills recently introduced in the Lok Sabha further to convert these ordinances into legislation.” They urged the Governor to take up the matter with the central government for urgent attention and action, pointing out that the new changes in the agricultural marketing system have led to apprehension amongst the farmers that the government is planning to withdraw from the assured procurement of every grain produced by them.

The memorandum further urged upon the Union Government to review and reconsider the measures introduced by the Bills, “as these are unlikely to deliver on the promises made out of them. Agri-marketing should be left to the States as envisaged in our Constitution.”

The Bills relate to the three ordinances issued by the Union Government on June 5, 2020, for permitting trade in agricultural produce outside the physical boundaries of the set-up agricultural market under APMC Act, easing restrictions under the Essential Commodities Act and facilitating contract farming.

The memorandum noted that the Agriculture Produce Marketing System in Punjab has served its purpose well for the last 60 years. “It has stood the test of time. It has ensured food security on one hand and livelihood of millions of farmers and workers on the other.” It further said that a well-developed state of the art infrastructure has also been created in Punjab, both for open marketing and storage of produce and seamless transportation of produce from farm-gate to mandi and godowns.

The Punjab State Legislative Assembly has also, in its sitting on 28th August 2020, passed a resolution urging upon the Union Government to reconsider these decisions and instead promulgate another ordinance making the MSP a statutory right of the farmers, the delegation submitted to the Governor.