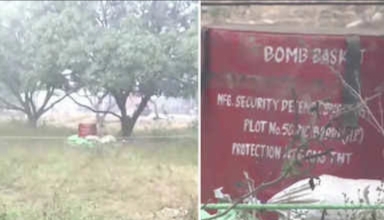 Bomb found near residence of Punjab and Haryana CMs in Chandigarh

Chandigarh: A live bomb was found in Rajindra Park in Sector-2 in Chandigarh near residences of Punjab CM Bhagwant Mann and Haryana CM Manohar Lal Khattar on Monday. There is also a helipad at some distance, where the CM’s helicopter of Punjab lands.

Chandigarh Police teams, bomb squads and dog squads have been called to the spot. The bomb is covered from all sides. At the same time, the army has been informed about this in incident. Army’s bomb disposal team has also been called.

Rajindra Park is about 1 km from Punjab Chief Minister Bhagwant Mann’s residence. Next to the park is the mango orchard. This bomb was found in the garden here. The operator of the tubewell installed inside the garden informed the police about the bomb.

As soon as the information was received, the police team, area DSP and disaster management team of Chandigarh Administration reached the spot. On investigation, a live bomb was found here.

The bomb is active, so as a precaution, it has been placed in a fiber drum. Sand bags have been placed around it. Army has been informed about this. At the same time, some soldiers have been deployed here for security.

After receiving information about the bomb, senior police officers reached there. After which the entire area has been sealed. Only the army’s investigation will reveal how old the bomb is and whose it may belong to.

The army team will arrive from Chandimandir on Tuesday morning.