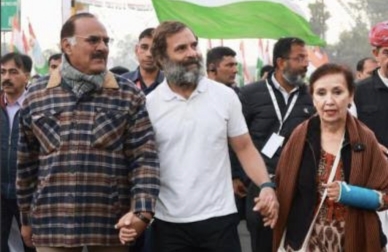 New Delhi: The Central Bureau of Investigation (CBI) has registered a case against former finance secretary and Economic Advisor to Rajasthan Chief Minister Ashok Gehlot Arvind Mayaram on charges of corruption in the supply of special coloured thread for Indian banknotes and raided his premises.

The action against the former officer comes a day after he joined Rahul Gandhi’s ‘Bharat Jodo Yatra’.

In its FIR, the CBI has alleged that Mayaram, in connivance with a UK-based company De la Rue International Limited and unknown officials of the Ministry of Finance and the RBI, hatched a conspiracy to give undue advantage to the firm.

“The company has alleged that Mayaram, as finance secretary, illegally extended the expired contract with the company for supply of special coloured thread for Indian banknotes for three years without obtaining mandatory security clearance from the Ministry of Home Affairs or informing the then finance minister,” it said.

The CBI carried out searches at the residential premises of a retired IAS officer of the 1978 batch in Jaipur and Delhi to arrest him. The central probe agency had initiated the probe against the former officer in 2018 on a complaint by the chief vigilance officer of the department of economic affairs in the finance ministry.