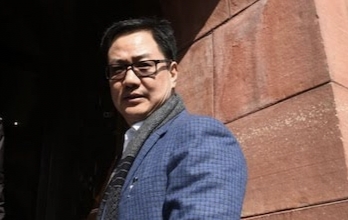 He said that for democracy to move forward strongly in the country, it is necessary to have an independent judiciary. Along with this, he also talked about the letter written to the CJI.

Law Minister Kiren Rijiju said that after becoming a judge, he does not have to face any election or public scrutiny. Judges, people watch their decisions and the way they judge and assess themselves. Nothing can be hidden in this era of social media.

Earlier, Rijiju was reportedly under attack from the opposition for a letter sent to the CJI of the Supreme Court.

Rijiju spoke to the media in Delhi on the subject of his letter to the CJI.

He said, “I don’t know who came to know from where and made news that the law minister wrote a letter to the CJI that there should be a representative of the government in the collegium. There is no head to this. From where will I put another person in that system?”