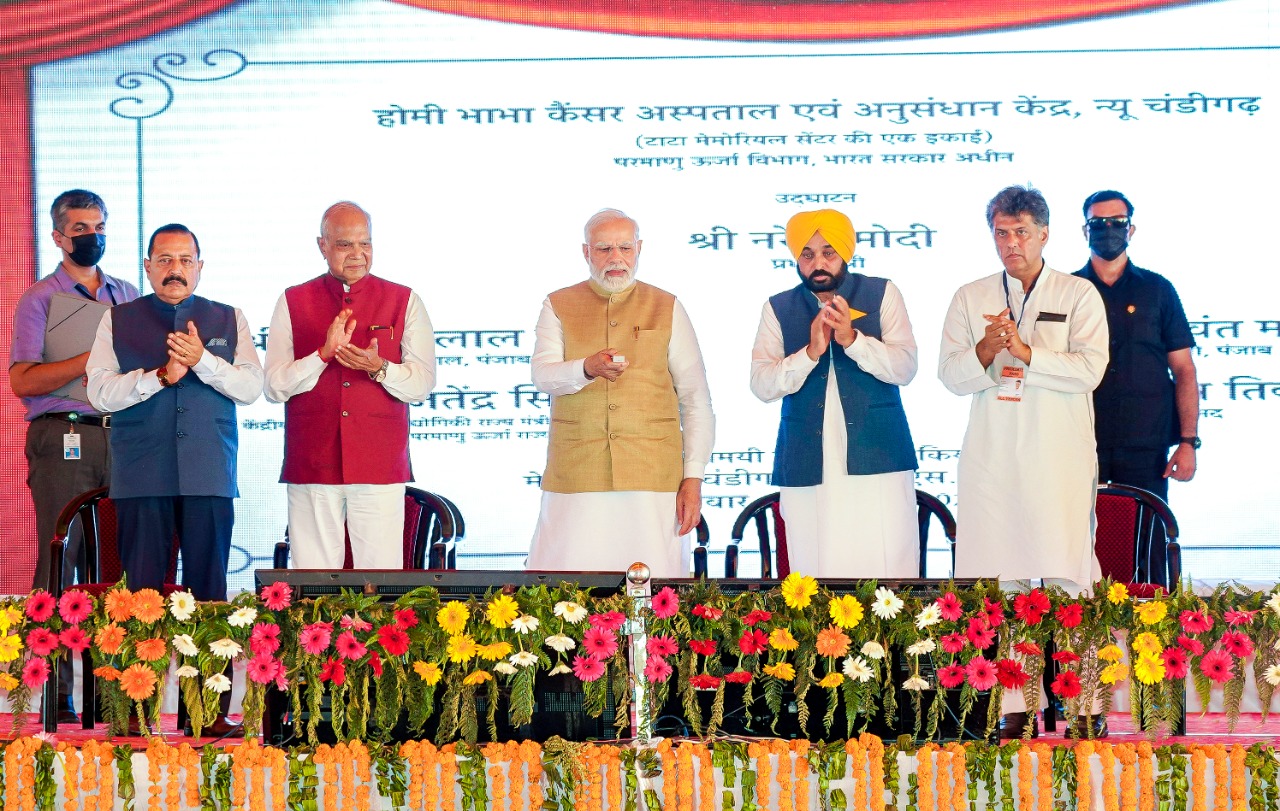 “In common parlance the Punjabis are even afraid of taking name of cancer as its treatment is too costly. But this centre will go a long way in ensuring accessible and affordable cancer treatment to region” said the Chief Minister while thanking Narendra Modi for this project.

Addressing the gathering during a function to dedicate this project to nation by Prime Minister, Bhagwant Mann said that this is a historic initiative which will help the state in its crusade against cancer. He asserted that though the state has played a key role in making country self reliant in food production but due to excessive use of pesticides and insecticides Punjabis have fallen prey to cancer disease. The Chief Minister categorically said that this hospital will not only provide treatment to cancer inflicted patients but will also help in ensuring its prevention through extensive research.

The Chief Minister expressed satisfaction that 100 bedded Homi Bhabha Cancer Hospital at Sangrur has been imparting quality cancer treatment to people. He asserted that around 37,000 patients have been successfully treated so far in this premier hospital. Bhagwant Mann unequivocally said that the newly set up centre at new Chandigarh will be a milestone in providing quality cancer treatment not only to patients from Punjab but to neighboring states like Jammu and Kashmir, Himachal Pradesh, Haryana, Uttarakhand and Rajasthan also.

The Chief Minister further revealed that as Member of Parliament he was entitled to refer three critical needy patients to big hospitals every month for treatment under Prime Minister’s relief fund. Bhagwant Mann asserted that he judiciously utilised this facility for ameliorating the sufferings of several cancer patients during eight years. He also said that the state government has so far given Rs 888 crore to nearly 69,000 cancer patients under the Chief Minister’s Relief Fund.

Recalling immense contribution of Punjabis in national freedom struggle, the Chief Minister asserted that more than 90% of people, who sacrificed their lives during war for independence, were from Punjab. Likewise, he emphasised that Punjabis are also playing a key role in protecting the independence of the country. Bhagwant Mann said that similarly ace sportspersons from Punjab like Milkha Singh, Dara Singh, Balbir Singh and others have also brought laurels for country in arena of sports.

Terming Punjab as the finest gem in the ring of country, the Chief Minister said that strenuous efforts are being made to restore the pristine glory of the state. He said that though due to failure of the previous governments some law and order issues were initially faced by the state government but now things are completely under control. Bhagwant Mann asserted that Punjab Police with the support of central para military force is keeping strict vigil for foiling the nefarious designs of forces inimical to peace, progress and prosperity of Punjab.

CM also solicited fulsome support and cooperation from the Union government for effectively checking the cross border smuggling of drugs and arms through drones. He emphasised that Punjab is fighting nation’s war and the union government must extend support to Punjab for this noble cause. Bhagwant Mann expressed hope that the Prime Minister will magnanimously help the state with more such gifts.

The Chief Minister also apprised Narendra Modi that state government is according top priority to health and education sector in Punjab. He said that state government is laying major thrust on checking the brain drain in country for providing more employment opportunities to the youth. Bhagwant Mann envisioned that day is not far away when Punjab will re-emerge as a progressive and healthy state in country.

Earlier, the Chief Minister also felicitated the Prime Minister with a shawl and replica of Sri Darbar Sahib (Golden Temple).