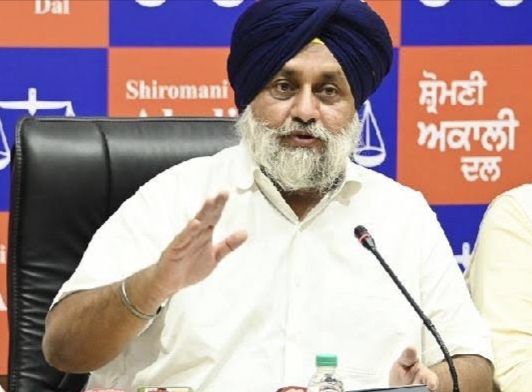 Don’t to run away from compensating farmers for cost incurred in paddy straw management, Badal to CM Mann

Chandigarh: Shiromani Akali Dal (SAD) president Sukhbir Singh Badal today asked chief minister Bhagwant Mann not to run away from compensating farmers for the cost incurred in managing paddy stubble as promised by him, even as he asked the AAP government to stop penalizing farmers by indulging in draconian acts like making red entries in their revenue records.

In a statement here, the SAD president said the State government had moved a proposal to give cash incentive at the rate of Rs 2,500 per acre to farmers to encourage them not to burn paddy straw. “It was proposed by the chief minister that both the Punjab and Delhi governments as well as the centre should contribute to make this incentive a reality. The chief minister should tell why the Punjab and Delhi governments, which are both run by AAP, have refused to release a single rupee for this initiative”.

Asserting that the chief minister was consistently making announcements for publicity only, Sukhbir Badal said “earlier Bhagwant Mann urged farmers to sow Moong by promising it would be purchased by the government on the minimum support price rate but went on to procure only ten per cent of the total crop”. He said now also the chief minister has made grandiose announcements to give an incentive of Rs 2,500 per acre to farmers to prevent burning of paddy stubble but had reneged on this promise when the time came to deliver.

Badal said it was shocking that farmers had not only been left to their fate, but the Aam Aadmi government had directed district commissioners to make red entries in revenue records of farmers who burnt paddy straw. “Farmers are already facing a severe crisis due to the AAP government’s failure to compensate them for repeated crop losses. Now small farmers, who are the most affected, are being made ineligible to take loans on their lands or mortgage them”.

Asserting that the chief minister’s offer that farmers could take advantage of subsidized straw management machines was impractical, Badal said “such machines need heavy tractors to run them. It is not possible for small and marginal farmers to either purchase these machines or run them”. He also gave the example of how farmers who had purchased such machines last year had been left high and dry with the government refusing to release any grants to them to subsidize the cost of the machines.

Asking the chief minister to deliver on his promises, Badal said “either farmers should be paid the incentive of Rs 2,500 per acre as promised by you or the State should take on the responsibility of managing the paddy straw. Expecting farmers who are already facing financial ruin to spend more money on managing paddy stubble is not possible”, he added.