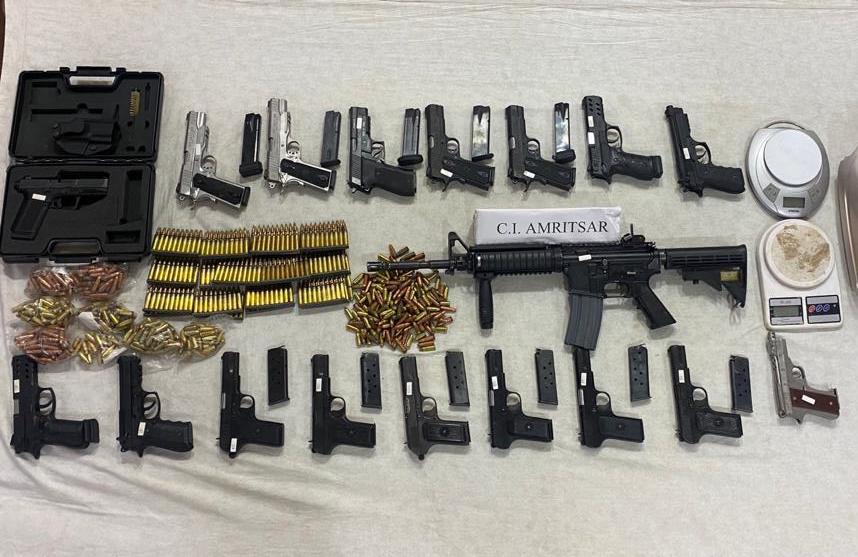 CHANDIGARH: Punjab Police has arrested three more members of the drone-based arms/ammunition smuggling module and recovered a fresh cache of sophisticated arms and ammunition from their possession, said Director General of Police (DGP) Gaurav Yadav here on Saturday. A total of five members of this module have been arrested so far.

Those arrested have been identified as Surinder Singh of village Barwala in Tarn Taran, Harchand Singh and Gursahib Singh, both residents of Valtoha in Amritsar. The Police have recovered Rs 1.01 crores cash, 500 grams heroin, 17 pistols along with 400 live cartridges, one MP-4 rifle along with 300 live cartridges, two weighing machines and two currency counting machines from their possession.

Earlier on Wednesday, the Police team from Counter Intelligence Amritsar had arrested two members of this module including a prisoner identified as Jaskaran Singh and his aide Rattanbir Singh, after recovering 10 foreign-made pistols from locations pinpointed by them, taking total recovery of pistols to 27.

Divulging details, DGP Gaurav Yadav said that during investigations it came out from Jaskaran Singh and Rattanbir Singh that their associate Surinder had picked up the consignment of arms/ammunition that was previously smuggled by them with the help of drones from Pakistan. Following inputs, Police managed to arrest Surinder on Friday and recovered 10 pistols along with six magazines and 100 live cartridges from his possession, he added.

He said that after investigations revealed that Surinder, on the directions of Jaskaran Singh, used to pick consignments from Rattanbir to further deliver them to two brothers Harchand and Gursahib, the Police teams have also arrested them. The Police have recovered the remaining part of consignment from their possession which includes seven Pistols, one MP-4 Rifle and 500 grams heroin, besides, Rs 1.01 crore cash, Weighing machines and currency counting machines from their possession.

The DGP said that further investigations are on to determine the other consignments from Pakistan, which may have been retrieved by this module for further delivery to unidentified persons for commission of anti-national activities, he added.

AIG Counter Intelligence Amritsar Amarjit Singh Bajwa said that during investigations, accused Jaskaran confessed that he is in contact with a Pakistan-based smuggler identified as Asif, who used to deliver consignment of narcotics and arms/ammunition from Pakistan using drone and Rattanbir used to retrieve them on his directions.