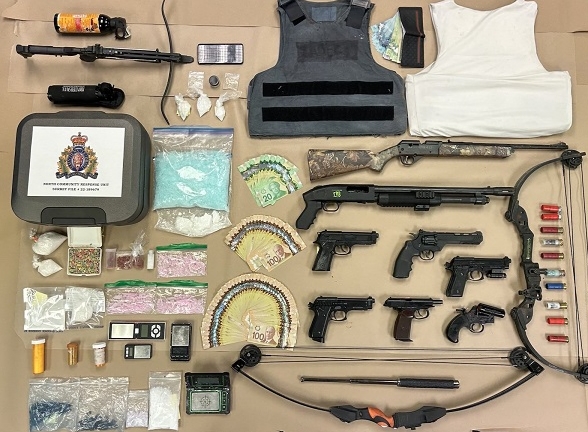 Surrey: In a major success, Surrey police have seized loaded firearms, drugs and cash from a residence in Whalley area.

Surrey RCMP arrested eight people and seized a significant amount of drugs, cash and a loaded shotgun from a residence in the 13700 block of Grosvenor Road.

According to the police, on January 11, 2023, Surrey RCMP North Community Response Unit (NCRU), with assistance from the Lower Mainland Integrated Emergency Response Team and Surrey RCMP Mobile Street Enforcement Team (MSET), executed a Search Warrant at a residence in the 13700-block of Grosvenor Road.

The Search Warrant was issued under the Controlled Drugs and Substances Act, stemming from an ongoing investigation into drug trafficking in the neighbourhood.

One person was held in custody for breach of probation and the others were released pending further investigation.

S/Sgt Nigel Pronger of Surrey RCMP’s Community Response Unit said, “Residents deserve to feel safe and secure in their neighborhoods. If you observe suspicious activity, criminal behaviour or something that negatively affects safety in our community, you are encouraged to call police. Our goal is to address safety concerns and ensure our neighbourhoods are a great place to live and work for everybody.”