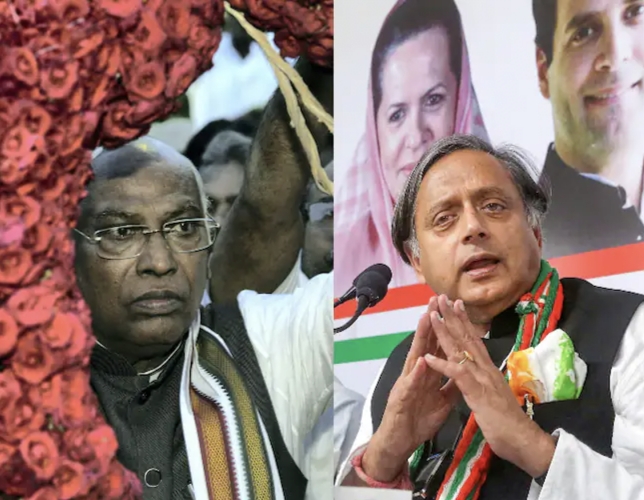 Elections after 22 years: Mallikarjun Kharge or Shashi Tharoor- Congress to elect its next chief today

New Delhi: Today is a historic day for the Congress as voting for the post of Congress president will be held from 10 am to 4 pm.

The party is going to polls for the president’s post after 22 years, while after 24 years, someone from outside the Gandhi family will be the president of the party.

Senior Congress leaders Mallikarjun Kharge and Shashi Tharoor are in the race for the post of president.

Over 9,000 representatives of the Pradesh Congress Committees (PCCs) will elect the party’s new president through secret ballot. As many as 68 booths have been set up at 40 centres across the country for voting.

This is the sixth time in the 137-year history of the Congress that elections are being held for the post of president. Congress president Sonia Gandhi and congress general secretary Priyanka Gandhi Vadra are likely to cast their votes at the AICC headquarters.

At the same time, Rahul Gandhi will participate in voting at the camp site of Bharat Jodo Yatra at Sanganakallu in Bellary, Karnataka. He will be joined by around 40 PCC representatives who are part of the yatra.

Being close to the Gandhi family and supporting several senior leaders, Kharge is considered a strong contender for the post of party president. However, Tharoor is also projecting himself as a strong candidate for a change in the party.

Tharoor raised the issue of unequal opportunities during the election campaign, but along with Kharge and the party, he has also admitted that members of the Gandhi family are neutral and there is no “official candidate”.

Preparing for the election

As many as 68 booths have been set up at 40 centres across the country, where the voting process will take place from 10 am to 4 pm.

There are around 9,800 voters (state representatives) for the post of Congress president who will vote for one of the two candidates Mallikarjun Kharge and Shashi Tharoor.

Cwc members, including Sonia Gandhi, Manmohan Singh, Priyanka Gandhi, will vote at a booth at the Congress headquarters at 24 Akbar Road.

One booth has been set up in the Bharat Jodo Yatra camp, where Rahul Gandhi and about 40 voters will vote. The Central Election Authority has made arrangements for voting at the resting place associated with the yatra at Sanganakallu in Bellary, Karnataka. A total of 40 ‘Bharat Yatris’, including Rahul Gandhi, are Pradesh Congress Committee delegates.

Candidate Kharge will vote in Bengaluru at 10 am and Tharoor at the state Congress office in Thiruvananthapuram at 11 am.

After the polling, the ballot boxes will be brought to Delhi where counting of votes will take place on October 19 at the party headquarters and the results will be declared.